Charles Darwin, an English naturalist and geologist, set out on a five year expedition on The Beagle in 1831. On his expedition he observed the rainforest in Brazil, discovered fossils and bones of extinct animals, experienced an earthquake in Chile, and finally landed on the Galapagos Islands in 1835.

What Darwin observed on the islands contributed substantially to the formation of his theory of evolution.

When Darwin landed in the Galapagos Islands, he realized they were only recently inhabited. Just three years before Darwin’s arrival in the year 1832, General Jose Villamil from Ecuador founded a colony, and in the same year Colonel Ignacio Hernandez took over the islands and gave them Spanish names. Due to virtually no human settlement, Darwin was fortunate to observe the environment in its pristine, untouched state. He noted that mockingbirds resembling those in Chile, exhibited different traits from island to island. He also noted variations of the giant tortoise shell on each island.

Charles Darwin spent a mere six weeks on the islands, however, these six weeks proved to be enough for him to explore and observe the animals on the islands. The isolation of the islands allowed species to evolve and adapt to their surroundings. Darwin even noted particular adaptations to conditions of individual islands. He also observed how tame the animals were due to lack of predators. Darwin’s observations in the Galapagos provided the foundation for his theory of evolution.

Today one can still observe this rare behavior: animals on the islands living in harmony and not appearing disturbed by human presence. However, humans are present more than ever, inhabiting four of the islands with over 40,000 citizens and 170,000 visitors- last year alone. Imported species such as goats, ants, rats, cats, and dogs have adversely impacted the natural wildlife on the islands. The last tortoise of his kind, Lonesome George, was rightfully named as his giant tortoise sub-species became extinct upon his death in June of 2012. Although Lonesome George was successful in mating, the eggs did not survived long enough to hatch. George died a peaceful and natural death and was estimated to be over 100 years old. 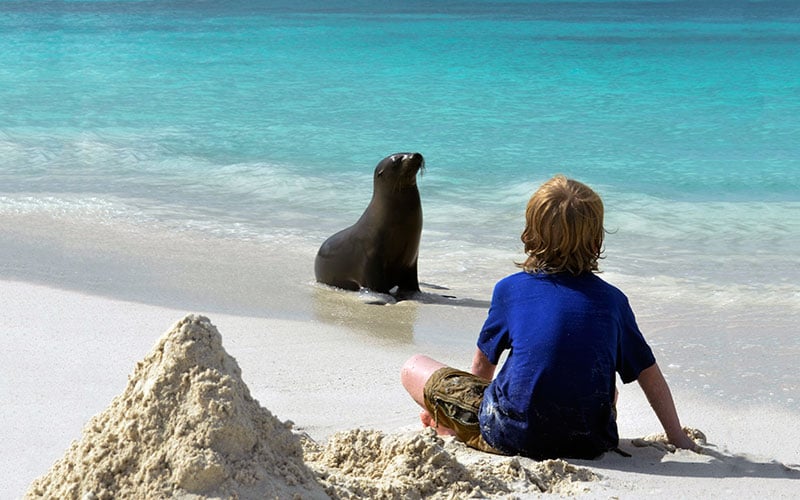 The land iguanas, finches, and tortoises still live in enough solitude to note their variations on each island. While the Galapagos Islands offer an amazing landscapes and an enchanting environment, human presence and introduced species have impacted the pristine, unique ecosystem of the islands. Many conservation efforts are being made to restore the Galapagos Islands’ pristine environment. Nevertheless, the fascinating quality of the islands that once enthralled Charles Darwin continues to enchant tourists and natives alike. There is no better time than today to come see what positive things are being done on the Galapagos Islands to keep this place amazing- for future generations and years to come.