Threats to the Galapagos Environment

The Galapagos Islands, located 1000km off the coast of Ecuador, have been known for their pristine environment and unique wildlife. These remote islands have been privileged with the seclusion that has allowed ecosystems to evolve in a rare and unmatched way.

However, today the islands are experiencing the effects of extreme weather events, introduced species, a fast-growing population and exploding tourism.

The endemic species to the Galapagos have survived in harmony for hundreds of years. In fact, as Darwin noted many species have become so secluded that they have evolved and adapted to the environments of individual islands. Darwin noticed this particularly with the Galapagos Finch, a bird whose beak, color, and size is different on each island.

Galapagos Islands: Marine Iguana & LizardToday, you can see a large yellow land iguana on one island and a smaller, grayish land iguana on a different island. Recently, however, new species have been introduced to the islands and are disrupting the harmony of the endemic animals.

Rats, goats, and wild dogs are among these species brought to the islands by humans. On Isabela Island, for example, some hundreds of thousands of goats are destroying the tortoise population.

Galapagos Islands: Blue Footed FamilyThe four inhabited islands of Isabela, Santa Cruz, San Cristobal, and Floreana are now home to over 40,000 people. Although human settlement is restricted to only 3% of the islands (97% of the archipelago is protected by the National Park), the effect that this growing population has on the islands is becoming perilous.

As the Galapagos Islands gain popularity, more and more visitors grace the archipelago each year. While tourism is a booming industry in the islands, it is also taking its toll on the environment.

With airplanes landing and departing the islands’ four airports daily, yachts and cruises transporting tourists daily from island to island, and the hundreds of thousands of tourists trekking through the pristine landscape the wear and tear on the islands is increasing.

Extreme weather events have also taken a toll on the wildlife and environment. “El Niño” affects the islands every few years, raising the water temperature and increasing rainfall. Adverse effects of this phenomenon are perilous to marine life.

These threats to the Galapagos environment have become a serious issue and several organizations have now made it their mission to pursue Galapagos conservation projects. The Inter-institutional Committee for the Management and Control of Introduced Species, or CIMEI, is dedicated to controlling domestic animals and introduced species.

Galapagos Islands: Marine Iguana and Masked BoobiesIn efforts to address the increasing population, Ecuadorian President Rafael Correa and the Ecuadorian government is working on legislation to restrict immigration. So far the government has implemented new travel regulations and begun requiring “visas” for Ecuadorians visiting the islands.

The tourist traffic to the islands is also being regulated. An entrance fee for the Galapagos National Park ranging from $6 for Ecuadorian citizens to $100 for most foreigners is required upon arrival to the islands.

Additionally, travelers entering the Galapagos must purchase a Transit Control Card for a fee of $10, which contains a chip, a barcode, and an identifying photograph registering information about the traveler. This card allows the Galapagos National Park to track the number of guests on the island at any given time.

The Galapagos is a natural treasure; however, the beauty of these enchanted islands is in danger of being tarnished. 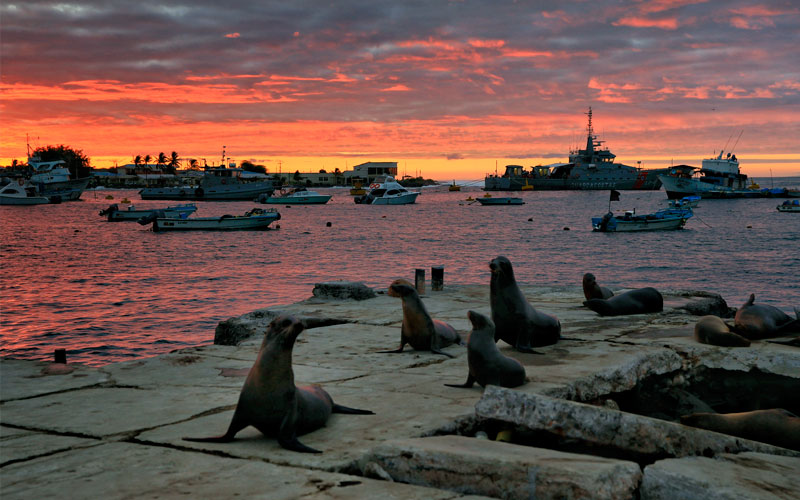 ClThe Galapagos National Park and other organizations are working hard to preserve the integrity, beauty, and immaculacy of this UNESCO World Heritage Site.

We can expect to see tighter regulations on immigration and tourism in the near future as measures are taken to protect the islands.