During World War II, the Galapagos Islands held a great secret: Base Beta – not-so-affectionately nicknamed “The Rock” by U.S. military personnel.This was a U.S. military base, established to protect the western access of the Panama Canal.Since the early 20th century, the U.S. had been in negotiations with Ecuador for a military base in the Galapagos Islands. With war looming in Europe and Asia, pressures intensified. In 1938, U.S. President Franklin D. Roosevelt visited the Galapagos. In 1940, local islanders reported seeing German U-boats in Galapagos waters. By 1941, Ecuador and the U.S. came to an agreement. 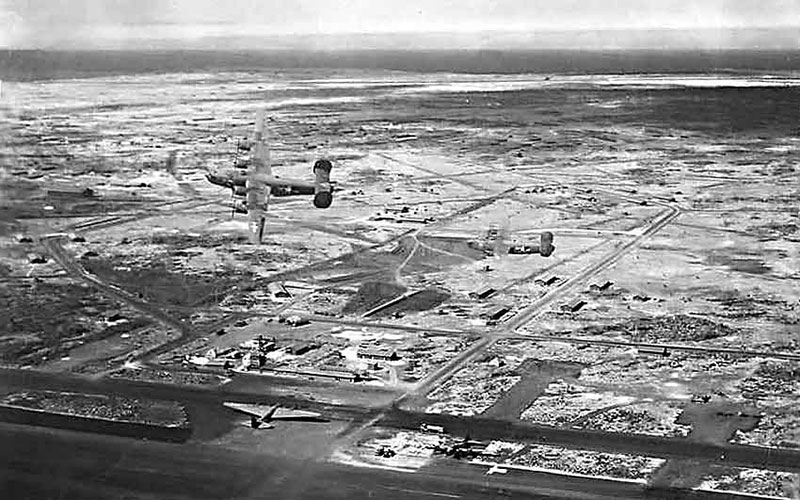 Because of its flat landscape and geographic location (in the center of the Galapagos archipelago), South Seymour Island (Baltra) was chosen. The base’s construction began in 1942. Within months, Base Beta had two air strips and 200 buildings, including barracks, offices, hangars, cinema and beer garden. It was home to over 2,400 servicemen and 750 civilians. The base’s demand for water, fish and other supplies provided jobs for local Galapagans.

The men stationed here during World War II came to call Base Beta “The Rock.” One serviceman explained to First Lady Eleanor Roosevelt during her 1944 visit: If you moved one rock, you would find two more beneath. The men had to endure this barren landscape bathed in deep-red dust.

They had no recreation other than deep-sea fishing, hunting iguanas and keeping wild goats as pets. Morale was low, so stints in the Galapagos were limited to six months.

The U.S. also had installations on San Cristobal Island, primarily for supplying Baltra with fresh water. Air strips were begun also on Española and Islands, but the projects were dropped.

After World War II, the U.S. turned the air force base over to the Ecuadorian government. In 1946 the buildings were dismantled.

The air strip where your plane lands, is part of that former facility. As your bus takes you to the Canal de Itabaca, watch for the concrete pads of the old buildings. And while wandering around Puerto Ayora, keep an eye out for the reconstructed barracks. You might just spy one.

Live history by yourself, and discover more about this paradise on Earth. Ask our Galapagos Experts how to discover the wonders of Ecuador and the Galapagos Islands. 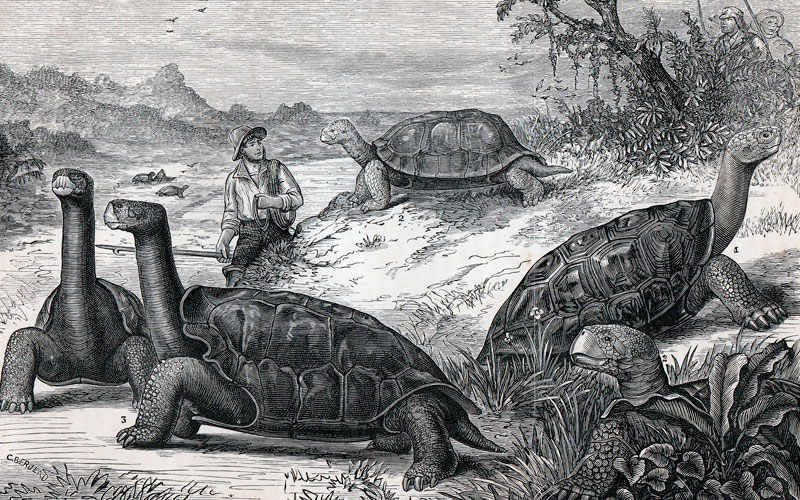 In 1487 two poor agricultural workers gave birth to Tomas Gomez in the rural village of Berlanga. It was an inauspicious entrance to the world for Tomas de Berlanga who went on to be the first ‘western’ person to see and set foot on the Galapagos some 47 years later in 1534.

It was Berlanga who named the Galapagos Islands which are named after a Galapago saddle that looks like the saddleback carapace of some of the Giant Tortoises he saw on the islands.

It’d be wonderful to say that Berlanga set out to discover the islands and that once he did he settled them establishing a thriving community around a Catholic church and central square. It didn’t quite work out that way.

Unfortunately, Berlanga discovered the islands unintentionally, his master galleon becalmed in the doldrums and then dragged westwards by the Humboldt Current.

He and his crew nearly died there, running so low on water they had to drink water stored in cacti and as soon as the winds picked back up they fled as quickly as they could to resume a voyage to mediate a Conquistador dispute in Peru.

In fact, his report to the Spanish king was so disparaging, talking of huge tortoises, lava, desert and ‘serpent-like lizards’ that Charles V probably binned it after a first read and that was that …. The Spanish never laid claim to these islands considered to be on the edge of the world.

It is speculated that before Berlanga found the islands the Incas arrived in the islands because traces of Incan relics were found there by Thor Heyerdahl in the 1950s – but doubt has since been cast on that theory as the Incans weren’t seafarers and the Galapagos Islands are a good 600 miles to the west of the South American mainland.

If the first known visitor to the islands was Berlanga then the first known permanent settler was again somebody who arrived by accident. An Irish sailor named Patrick Watkins was marooned on the island of Floreana from 1807-09.

He was certainly resourceful because he apparently grew vegetables and hunted. We don’t know what he hunted but the likelihood is that Giant Tortoises were the easiest and best value prey to hunt.

In the 300 odd years between Berlanga’s arrival and Watkins’s short stay, the islands were used as a base by British pirates who attacked Spanish galleons laden with gold and silver en route to Spain from Peru. Later on, whalers and fur traders hunted the very numerous sperm whales in the seas around the Galapagos and the Galapagos Fur Seal.

The newly formed nation of Ecuador couldn’t ignore territory on its doorstep so they annexed the islands in 1832 and like remote islands throughout history the first obvious use was as a penal colony for the worst and most disliked criminals on the mainland.

The penal colony needed a governor and that duty fell to an influential army general called Villamil (Puerto Villamil, the largest village on Isabela Island is named after him) and the convicts and the General were joined by farmers and tradesmen. These in truth were the first inhabitants of the Galapagos Islands.

According to the memoirs of Villamil, the Galapagos became a dangerous location because of the criminals and the numbers of people living there diminished in the coming years. Villamil by all accounts was an extraordinarily energetic man involved in armed conquests, business ventures, and political intrigues.

He wrote that the Galapagos “…has a delicious temperature, abundant and good water with a spring that produces 80 gallons an hour, there are currently about 400 people living here and I estimate that this fertile land could support up to 12,000 inhabitants.”

During this era the Galapagos Island’s most famous visitor, Charles Darwin visited in 1835. His stay was short, just 36 days, but ta-dah >>> ‘the rest is history’!! Without the animals, the Galapagos wouldn’t have become the ‘trip of a lifetime’ destination that they are now, but equally without Charles Darwin’s contribution to science and history then the endemic animals wouldn’t be so famous.

At the start of the 20th-century Ecuadorian businessmen tried to establish sugar cane plantations on San Cristobal and Isabela islands with varying degrees of success. Before the Second World War Norwegian and German settlers arrived on Floreana and then moved to San Cristobal and Santa Cruz. During the Second World War Ecuador allowed the U.S to create a naval base on the island of Baltra. 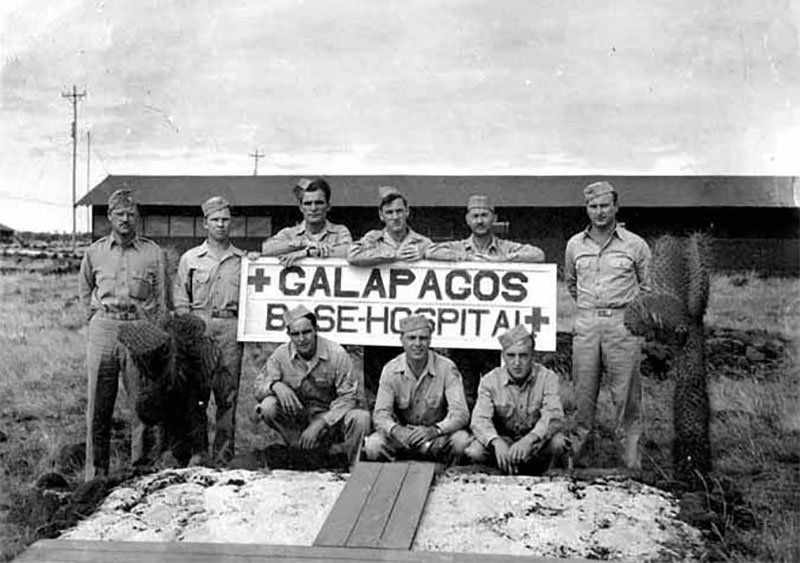 These were remote islands still and just getting there was difficult much less carving out a life on these islands. Just 60 years ago back in 1959, it’s estimated that between just 1,000 and 2,000 inhabitants called the Galapagos home, most living on Santa Cruz and San Cristobal where there is more potable water.

In 1959 the Galapagos was declared a National Park by the Ecuadorian government. And in 1969 the first yacht was introduced to the islands allowing tourism to kick off which slowly attracted a steady stream of migration from the mainland so that by 1972 there were 3,500 inhabitants who were working in tourism and agriculture.

New fisheries, especially for lobster and sea cucumber have encouraged many migrants to arrive and procure a living in this industry which is often in conflict with conservation efforts.

Still, it is one thing when a small nation creates a National Park and quite another when a world body such as UNESCO qualifies somewhere as a World Heritage Site. International tourism to the Galapagos exploded in the nineteen-eighties and nineties after the Galapagos Islands were named among the first 12 world heritage sites in 1978.

More tourism equates to more migrants coming to the Galapagos to take advantages of all the additional direct and indirect employment opportunities. 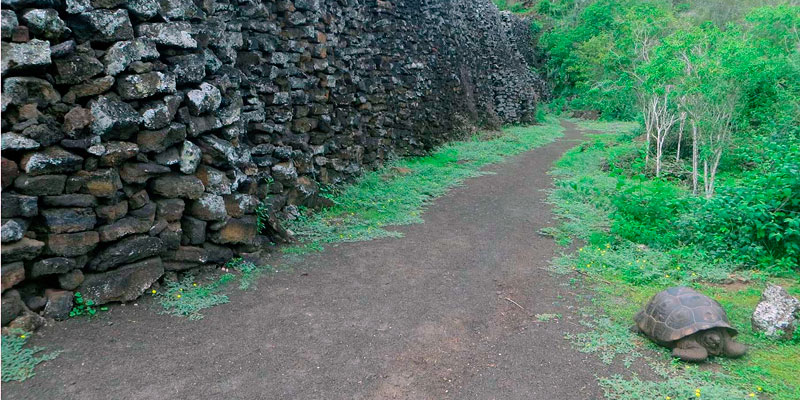 This explosive increase in inhabitants, tenfold in 40 years, has occurred because the tourism numbers have risen exponentially as well. There are now 100,000 visitors a year of whom 80,000 are tourists and the remainder business people or visiting friends and family.

Five islands are inhabited now; Floreana, Isabela, Santa Cruz, San Cristobal and Baltra. The 2 largest towns are really no more than large villages; Puerto Ayora on Santa Cruz and Puerto Baquerizo Moreno on San Cristobal. To be sure there are hotels, restaurants and gift shops but sea lions still hang out on the benches and it’s easy to walk to the edge of ‘town’ and contemplate the natural beauty all around.

It is agreed between all invested parties that tourism is the motor that drives the economy but also that the pristine unique environment that attracts tourists and leads to population growth could be a risk factor if not properly controlled.

With new laws introduced in 2007 by President Correa, it seems finally that the number of Galapagos inhabitants is being well controlled and that, for now at least, the future of the Galapagos as a spectacular international tourist destination is secure.