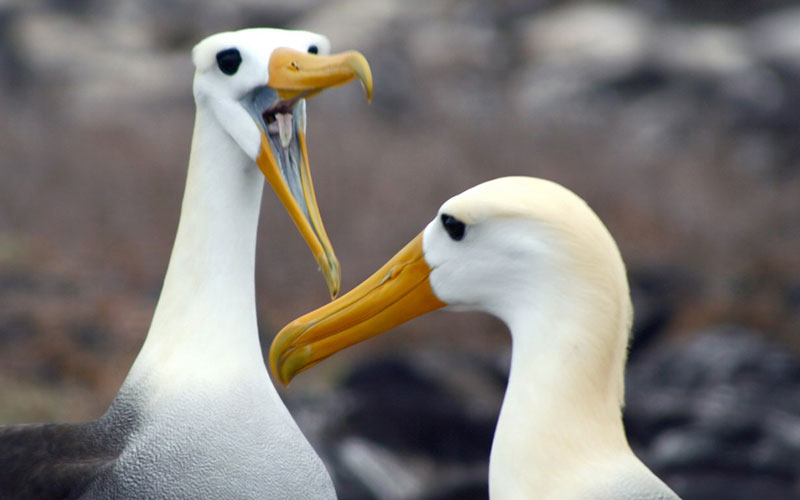 What do Miami Vice, Fleetwood Mac, and the original film “The Adventures of Sherlock Holmes” have in common? Answer – they have all made reference to the albatross. The Galapagos Albatross or Waved Albatross, as it is also known, is one of the 21 species of albatross, an animal with such mythical allure that it has crossed over into popular culture hundreds of times.

In fact, sailors are known as superstitious people who look for signs; in earlier centuries they thought that albatrosses were the reincarnated souls of drowned sailors and when they followed your ship it was seen as good luck or an omen of good things to come. On the other hand, if you killed them, perhaps for food as many sailors did, it was considered very bad luck!

The most famous poem referring to a mariner was The Rime of the Ancient Mariner by Samuel Coleridge. The captain of a ship shot an albatross and then some seriously bad luck hit the ship and the crew leading eventually to their deaths, but before that, the crew hung the albatross around the neck of the captain as a symbol of the bad luck he had brought upon them. 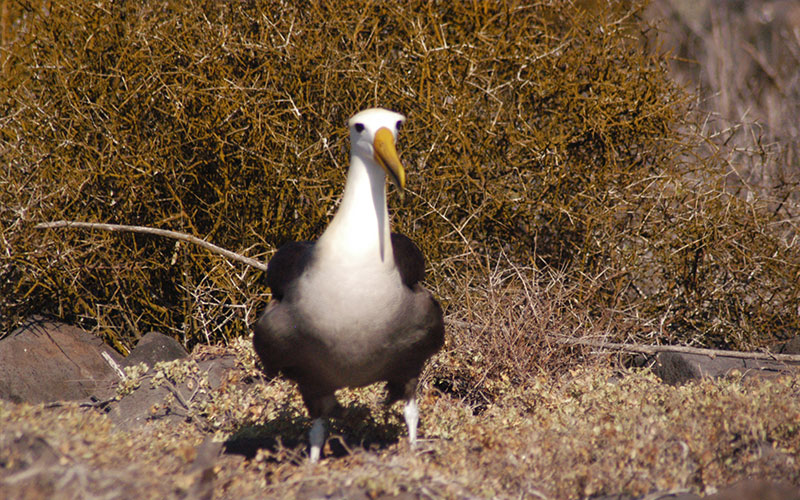 To have an albatross around your neck is now a saying meaning that you are carrying an emotional burden. Wow! Heavy stuff! But let’s concentrate on live albatrosses and the beauty in them.

Albatrosses live on the oceans most of their lives. They have huge wingspans, larger even than a condor, and although the Galapagos Albatross is not the largest it still has a wingspan of 7 to 8 feet.

They are the ultimate gliders covering great distances with just minimal effort.  They hardly move their wings to fly because they rise into the wind and then turn and glide in the same direction as the wind. Their wings are so evolved that when fully extended they have a tendon that locks into place meaning they don’t waste energy straining to stretch their wings. For every meter, they drop they can glide forward 22 meters.

And when flying their hearts are beating at the same rate as if they were at rest.  What could be more efficient than that? How about sleeping when they are flying? Scientists know that albatrosses can’t be asleep on the water for too long for fear of being eaten so they now speculate that they have different sleep patterns meaning they fly hundreds of miles on auto-pilot half asleep.

The Galapagos Albatross nests on Española Island from March through to September and can be seen on the South American coast in northern Peru and Ecuador the rest of the year. They are considered endemic to the Galapagos Islands because they are the same population of birds that just migrate rather than two distinct populations.

The Galapagos Albatross is the only member of the albatross family that lives in the tropics. They fly over a much smaller area than some of their cousins, not flying thousands of miles as other albatross species do, possibly because the Humboldt Current is like an all-you-can-eat buffet restaurant compared to other minimalist-cuisine ocean areas.

They are sometimes called Waved albatrosses for the wave pattern of their wing feathers. Their crowns and necks are tinted a light yellow contrasting with their white breasts. They also have huge bright yellow bills which seem altogether too long for their small heads.

That said there is some impressive technology inside those bills. There are 2 tubes along the sides of the bills that can actually measure the albatross’s air speed so that they don’t come close to stalling. The same bills also have a nasal gland that gets rid of all the salt that the birds take in as they dive into the oceans to eat plankton and small squid. Air speed indicators and a mini-desalination plant – how long before an albatross becomes the symbol of a hi-tech company? 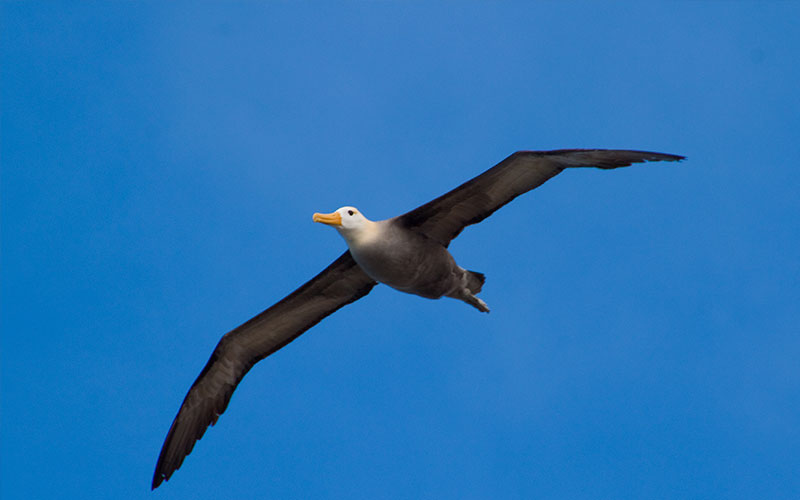 On the ground, Galapagos Albatrosses like to hang out on Espanola Island during the breeding season. They can be seen at Suarez Point where they use the cliffs as a launching pad but breeding takes place at Gardner Bay; here is where you get to see the epic courtship dance. If you look at videos made by tourists then about halfway through the video you can hear someone start to laugh – it really is one of the funniest things you will see any bird doing anywhere in the world.

The staccato opening and snapping of the bills produces a rapid clacking sound and then they wave them in the air at each other and smack them together as if in a pretend sword fight. They also step around each other bowing at the same time. They sound and look like tap dancers engaged in a friendly sword fight.

The albatrosses invest all this time in ritual mating so that they choose the right partner. In doing so they create a unique ‘dance’ that allows them to recognize each other when returning the following years; the male always arrives first on Espanola. The best time to see this ritual is in March and April.

Galapagos Albatrosses in common with other albatross species are monogamous and only lay one egg every year. Being an endemic species we should expect to see some differences between a Galapagos Albatross and all the other species. Sure enough, the Waved Albatross doesn’t even make a nest. Instead, it rolls the egg around the pair’s territory, often as much as 50 meters. It’s not clear why they do this but scientists have observed that the further an egg is rolled the healthier the hatched chick seems to be.

Sometimes disaster strikes and they lose the egg. You can only imagine how that conversation would go; “Babe, I’m really sorry but I’ve got to ‘break’ some bad news, I’ve lost our egg.” Funnily enough, there actually are rare cases of ‘divorce’ among Galapagos pairs and normally they occur after several years of failed breeding, or, one imagines, losing an egg more than once.

The 2 month incubation period generally ends in July or August when the chicks gather together in nurseries while the parents fly out to sea on the lookout for food. They fly from ten to 100 miles which might seem a long way to you and me but is probably like a trip down to the local supermarket for them. Any food they find is swallowed and mixed with oil in the adult’s bellies before being regurgitated and injected into the chick’s open mouths.

The fledglings continue to grow and develop safely because, as with all albatrosses, they are bred on islands that historically were free of mammals and therefore most predators, although the Galapagos Hawk preys on eggs and baby fledglings.

By December the fledglings are fully grown and ready for their maiden flights which often take place in the first days of January.  A third or more of the fledglings never make it back to their birthplace to breed themselves. The biggest threats are oil slicks and fishing hooks which seem to kill off more males than females affecting future breeding success. A recent fall in numbers has seen the Galapagos Albatross placed on the list of critically endangered species.

For now, we are free to enjoy their hysterical mating ritual and marvel at their effortless gliding abilities.