The Galapagos Islands were created by volcanoes over the course of ages, born of the fires deep within the Earth’s core. However the volcanoes in the Archipelago are different. The islands sit on what is called the Nazca Plate, one of which form the Earth’s crust in the middle of the Pacific Ocean, a particularity about this plate is that it does not collide with any other, which raises the question ¿if it doesn’t have any type of collision, why the volcanoes activity?

Volcanoes lava and geology are fundamental to understanding the uniqueness of Galapagos. Most people know that the inside of the Earth is made of magma, or molten rock, and that it’s very, very hot in there. So why don’t we get burned? Because Earth’s upper crust is cool and protects us from the heat. But the crust in not one big solid piece, like the coating on a cand M&M. Rahter, the crust is in the form several different pieces called “plates,” that move around and occasionally crash into one another.

The Galapagos Islands were formed by what Geologists call a “hot spot”, a place in Earth where the magma is hotter than its regular temperature. This is what happened in Galapagos (and in Hawaii and some other places on the globe). The Earth’s crust moved over the hot spot, and the resulting volcanoes formed the islands. The plate moves from west to east but the hot spot remains in one place. Therefore, the eastern Galapagos Islands such as Española and San Cristobal are the oldest ones, geologically speaking, and western islands like Fernandina and Isabela are the youngest. 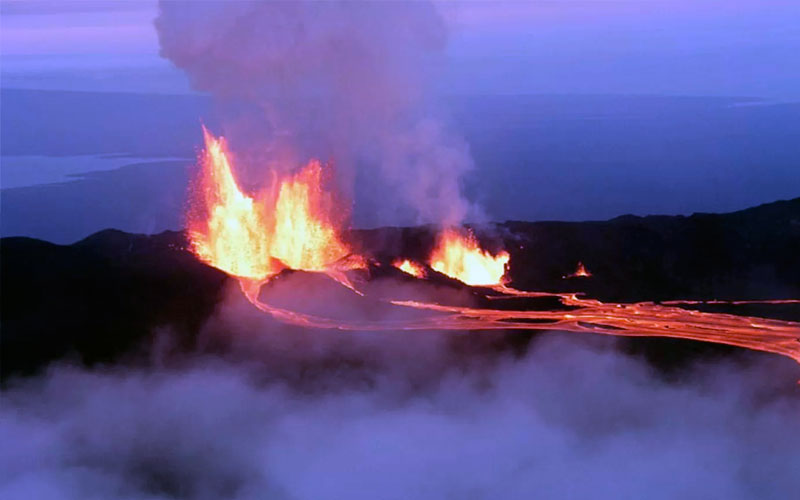 The eastern Galapagos Islands are no longer volcanically active. Some of them are very old, and have nearly been reclaimed by the sea. Genovesa, for example, is a small island and it’s all that remains of a once-enormous volcano. It’s no longer active: in fact, you may get to snorkel in the volcano’s crater!

The western islands, on the other hand, are still quite active, as they are still over the hot spot. The volcanoes on Isabela and Fernandina still erupt regularly.

In April of 2009, La Cumbre Volcano on Fernandina erupted, sending smoke, gas and ash high into the sky and endangering thousands of animals including Galapagos Marine Iguanas and Penguins. Although the volcano was erupting, visits to the other side of Fernandina Island continued!

In May of 2008, Cerro Azul on Isabela erupted briefly.

In April of 2009, La Cumbre Volcano on Fernandina erupted, sending smoke, gas and ash high into the sky and endangering thousands of animals including Galapagos Marine Iguanas and Penguins. Although the volcano was erupting, visits to the other side of Fernandina Island continued!

In May of 2008, Cerro Azul on Isabela erupted briefly.

In October of 2005, Sierra Negra (Isabela) erupted, shooting lava and ash into the sky. It had been dormant since 1978.

One noteworthy volcanic event took place in 1954, when a sudden volcanic event caused the underwater geography off of Isabela Island to shift. As a result, Urbina Bay was created when a section of the ocean floor was suddenly pushed above water. Reports from ship’s captains said that the area reeked for weeks of dead fish and marine life. It happened so fast that the sea animals could not escape! It is possible to visit Urbina Bay and you can still see some coral formations there along the trail.

Is the Volcanic Activity Dangerous?

Not really. Most of the visitor sites in Galapagos are far away from any volcano that might be dangerous. They are dangerous for the animals, however: giant tortoises occasionally get burned by lava or hot ash, and other animals may lose habitat. The rare Galapagos pink land Iguanas, which inhabit Isabela’s Wolf volcano, are considered at-risk because its numbers and habitat are so small that an inopportune eruption could wipe them out.

Most Galapagos visitors have come from around the world to see the unfearful wildlife or to dive in the crystal blue Galapagos waters. Some have come to follow in the footsteps of famed naturalist Charles Darwin, who visited Galapagos in 1835, and from where he got the inspiration to write his Theory of evolution. But not as many know that the geology of the islands is as fascinating as the wildlife.

The Galapagos Islands, a place where you can discover pristine wildlife, geology, and uniqueness, a place like you have never been before, and that you will not forget for the rest of your life.Contact us today and let one of our Galapagos experts guide you through planning a vacation that will turn you into a story teller.