Diving in the Galapagos Islands

The Galapagos Islands were chosen by Rodale's Scuba Diving as the world's top all around dive site for the year 2000. The Islands were also chosen for the top spot in "Best Fish Life", "Best Big Animal Dive", "Best Advanced Diving" and scored among the top as the "Healthiest Marine Environment", and "Best Value".

Most people book their Galapagos diving trip as a complete package on a live-aboard boat, although trips based out of Puerto Ayora offer consistent quality guides and safety standards.

Wonders of the Underwater World

Named one of the Seven Underwater Wonders of the World by CEDAM international, the Galapagos waters will make you wish that you could somehow shout out through your regulator to your diving partners all the wonders you see.

Imagine a realm where penguins swim in equatorial seas, no one bats an eye at four-eyed fish, and iguanas are found eating their algae meal submerged in the saltwater. Imagine dolphins leaping about in phosphorescent water and becoming the new friend of a playful sea lion pup. Open your eyes... you are imagining diving the Galapagos.

» Read more about the Galapagos Ocean 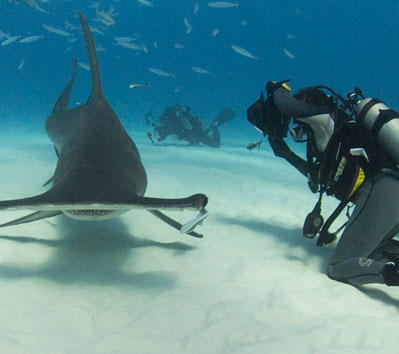 Some consider the Galapagos the premiere spot for seeing large marine fauna. Seeing pelagic species so close to shore is more common in the Galapagos than most any dive site in the world. Like the animals on land, the animals that inhabit these waters have not evolved with a sense of fear of humans, and your presence will seem no more than a curiosity to these animals.

The sharks that patrol these waters are timid and by no means dangerous, the sea lion pups that you see basking and awkward on the beaches are graceful and playful in the water; and spotted rays glide past you in the azure environment. One in every four marine species is endemic, making the varieties of angelfish and even chub in the water a marine biologist's jackpot. And after all, where else can you observe equatorial penguins diving with marine iguanas? 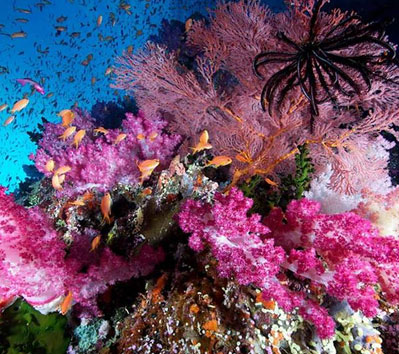 Diving in the Galapagos is not recommended for first-time divers. Recently noted in one diving magazine as one of the world's 10 most difficult recreational dive sites, many dive operators in the Galapagos take their clients on an easy initial dive to take note of their ability and let them orientate to the sometimes unexpected waters. Diving is often straightforward but the strong currents and the low visibility, surges and cold water they bring make for some demanding changes in the water. Bringing your PADI card and dive logs with you to the Galapagos is an excellent idea.

Despite their position at the Equator, the waters surrounding the Galapagos Islands are cool. The Humboldt current, coming south from deep upwellings, brings water as cold as 10 degrees C. This then mixes with the five warmer currents and they create an average temperature of 18 degrees year round with lows of 13 degrees C. The warm season, between about December and March, often has warmer waters of 23 degrees C.

If you are brining your own equipment, taking water temperatures into account, you are advised to bring a warm wetsuit. However, for surface snorkeling, most are quite comfortable in a swim suit. Keep in mind that the Galapagos are at equator and the above water temperatures often exceed 30 degrees C. The best spots for diving are Gordon's Rocks, with its school of hammerhead sharks, and Darwin & Wolf Islands, is only accessible for SCUBA divers. Other very popular spots are Punto Espejo and Leon Dormido.

» Read more about the Humboldt Current

All diving tours in Galapagos Islands .com are coordinated by diving guides who are licensed by the Galapagos National Park Service and are highly knowledgeable about the underwater wonders of the Galapagos.