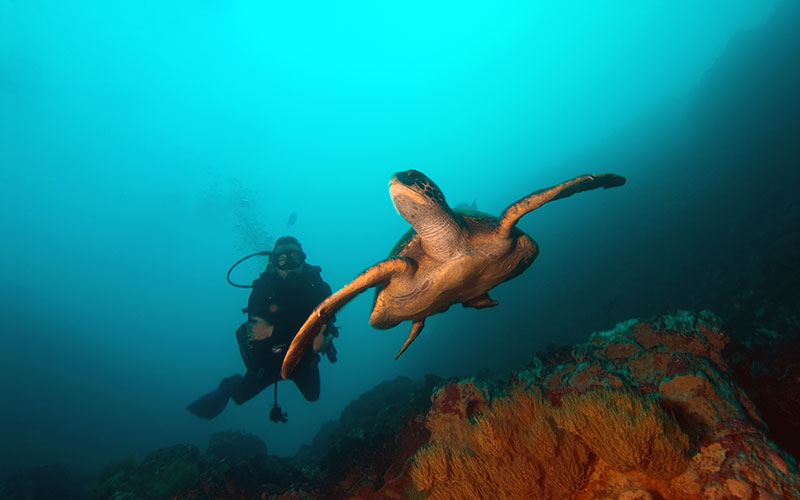 Did you know about the huge size of the Galapagos Marine Reserve? Its total area is of 133,000 sq. km., which is almost the size of Louisiana. In the other hand, the islands that comprise the Galapagos National Park cover just a small area of 8,000 sq. km. of wonders and uniqueness. Therefore, most of the Galapagos preserved area is a comprised by a submarine word filled with amazing species, coral reefs and many more that you can only imagine, that’s why the Galapagos is considered one of the best diving destinations in the whole wide World. Because of the shallow sandy beaches, rocky shores, mangrove forests, lagoons, high vertical cliffs and coral reefs, the Galapagos is like a dream come true to every sea animal. Sea lions and fur seals can enjoy, play and sleep on the sandy beaches, crabs can run above the lava rocks while iguanas take advantage of the rock’s heat, as well as coral reefs which are a great playground and haven for small tropical fishes.

Due to these ideal conditions, the Galapagos waters are home to some of the most fantastic submarine species in the World, from seahorses, temporal visitors like the marine iguana, the Galapagos penguin, to huge whale sharks, humpback and orcas whales. Playful sea lions will surround you while you go snorkeling, orcas may get really close to the dinghy ride for a great picture, while dolphins swim by the side of the boat during your cruising. The Galapagos undersea environment that holds quite a few endemic species, which means that you won’t be able to see them anywhere else in the World. 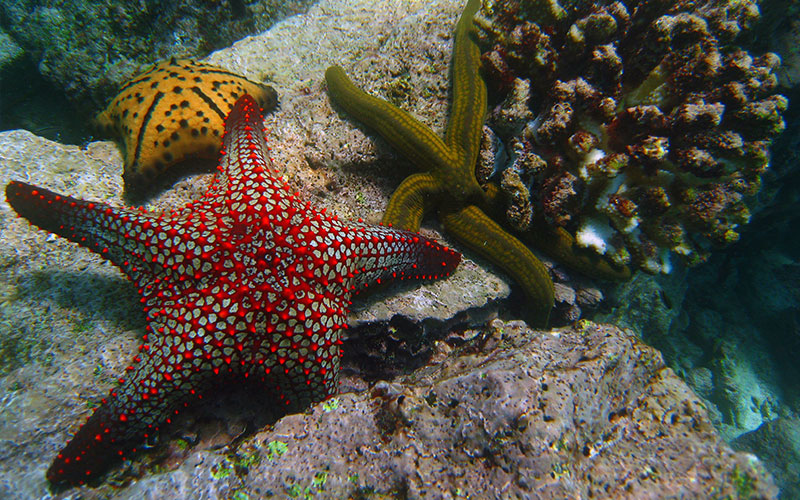 However, many of those amazing animals are threatened. Sharks, lobsters and sea cucumbers for example, are being killed because of overfishing. Luckily, many organizations as well as local fishermen are trying to reduce the fishing of these species.

However there is also illegal fishing which is much harder to control. It’s unbelievable but some illegal fishermen hunt tortoises for their meet and sea lions for their teeth and genitals. As weird as it may seem sea lions genitals are considered as aphrodisiac in Asia. Also, the meat, fins and oil of whale sharks as well as the fins of all other kinds of sharks are quite popular on the international markets – e.g. For shark fin soup – which in many places is considered a delight.

Why do so many sharks have to be killed or die by the consequences of having their fins cut off? How can someone just cut out teeth and genitals of poor cute sea lions? Right? This has to stop!! Fortunately, the sea around Galapagos can be controlled by modern techniques and therefore unauthorized boats can be detected.

But this sadly doesn’t mean that the illegal fishing can be completely prevented yet. Moreover, even the few legal fishing boats endanger many marine animals not just by overfishing, but also, penguins, sea lions and turtles often experience being bycatch. They get hurt, strangled by the net or drown in this procedure because they can’t get to the surface to get the needed air.

Another threat to the Galapagos marine life comes along with worldwide phenomenon’s, like garbage in the oceans, which makes water more acid, and to make the problem even worst, the climate change which is affecting the whole World heats up the waters arousing the water inhabitants.
10 Million tons of garbage flow into our oceans every year. About 75% of it is plastic, which is fatal to many submarine species. Each year, up to 100.000 marine animals and about one million seabirds die due to plastic. To visualize this, we have some examples for you:

When old fisher nets float on the ocean, dolphins, sea lions, turtles and other fish can easily get tangled in those. They either drown because they can’t get the air they need or suffer from severe injuries resulting from the attempt to disentangle. Many marine animals as well as sea birds die due to hunger even though their stomach is full, unfortunately, is full of plastic, which obviously is not their natural diet and therefore cannot be digested. Doesn’t have to be mentioned eating a lighter can cause some inner injuries. As it also does to humans, even a smaller consumption of plastic provokes infertility as well as changes in hormones and DNA in marine animals.

Did you know it can take up to 450 years for a plastic bottle to break down?
If this wasn’t enough, about half of the man-made billions of tons of CO2 emissions is absorbed by the ocean time after time. These emissions are turned into carbonic acid, which has devastating effects on the marine ecosystem. For some fish, the acidifications causes reproductive disorders, so that they die out slowly. Moreover gravely affected are shell-forming animals such as corals, oysters, shrimps and lobsters, who have trouble building up their shells in more acid waters. And through this, of course all those Galapagos animals who feed on them, like many sea birds.

Let’s talk a bit about the corals – the acidification as well as the warming ocean temperature threaten them a lot, at it shows at first sight!, many corals are already bleached, which means more than close to dead. This is not just sad for humans to watch, but a huge threat to about 25% of all the marine species, who rely on corals for food and shelter.

This means that with more and more bleached corals, less beautiful fish will be there to watch. So the amazing and colorful adventure of snorkeling and diving in the Galapagos might not be that beautiful anymore if we continue treating our earth and oceans as we do now.

Actually, diving and snorkeling in Galapagos before the El Niño Event in 1982 must have been indescribable beautiful! During this event, 95% of the Galapagos coral bleached. It’s really a justified question why we humans still do so less about caring for our oceans.

They are beautiful, giving us food supply and, well, a huge part of the oxygen in the Earth’s atmosphere. Something we should be concerned about.

Last, but not least, climate change in general of course also plays a great role in threatening many of our beloved Galapagos animals. The cute penguin now profits from the cold currents that allow him to live in the Galapagos. But if the temperatures continue rising, even this current can’t do much for the penguin.

As this specie cannot reproduce on high temperatures, the rising of the World temperature can produce the ending of this unique bird, yeap! Bye Bye Birdie. Some other species you might keep in mind are the sea turtles and marine iguanas. They lay their eggs on the shores. And it’s not just the introduced predators, which make life of the unborn hardly possible but also because of the rising sea levels due to the climate change. A higher sea level means less space on shore and consequently fewer eggs and less baby turtles and marine iguanas.

In order to preserve the beautiful Galapagos Marine Life as well as all those marine species all over the planet, we need to take action! We need to reduce our plastic consumption and we should get all our garbage out of the oceans as soon as possible – and don’t let any more garbage flow into it! Just take your favorite cotton bag instead of plastic ones next time you go shopping – and you already do a small step for saving our oceans. It’s a small drop into the ocean, but a way to get started.

You can also join local beach-cleanups or donate to organizations engaging in saving oceans or fighting climate change consequences. Just don’t ignore it! It exists. Look at the corals. They don’t die cause it’s fun.

Our ocean is dying – and we are the only ones who can save it!