Seriously! Penguins on the equator in the Galapagos? Pull the other one — next you’ll be telling me about camels that live in Antarctica!  But, as bizarre as it seems there is a Galapagos Penguin that happily swims and munches down on a fish smorgasbord here in the western isles of the Galapagos.

Now, if you are of a certain age – grandparents – you’ll remember Chilly Willy the cartoon penguin friend of Woody the Woodpecker who didn’t enjoy being cold. Then, regardless of age, you’ll remember the brilliant show-stealing penguins from the 2005 film Madagascar who dig a tunnel to escape a New York zoo and hijack a freighter ship.  Playful, adventurous and seeking warmer climes, they ended up in Madagascar but we think the film scriptwriters got their inspiration after taking a Galapagos cruise.

Penguins seem to turn up a lot in films and literature because they are such improbable animals. Flightless birds with flippers in place of wings that waddle about clumsily on shore only to transform into sleek fish-gobbling torpedoes once they are in the water. That, and of course the famous black and white coloring which gives them facial masks and has often been interpreted to give them slightly devious yet harmless personas.

But why are there penguins in the Galapagos? The answer is that no-one is 100% sure but it’s considered likely that in common with other species in the Galapagos they may have been dragged away from locations such as Northern Chile and Peru by strong storms and the prevailing northerly current.  What is more certain is that as they spend half their lives on land and half in water they couldn’t survive if the Galapagos if it were not for the cold, nutrient-rich Humboldt Current that flows around the islands. 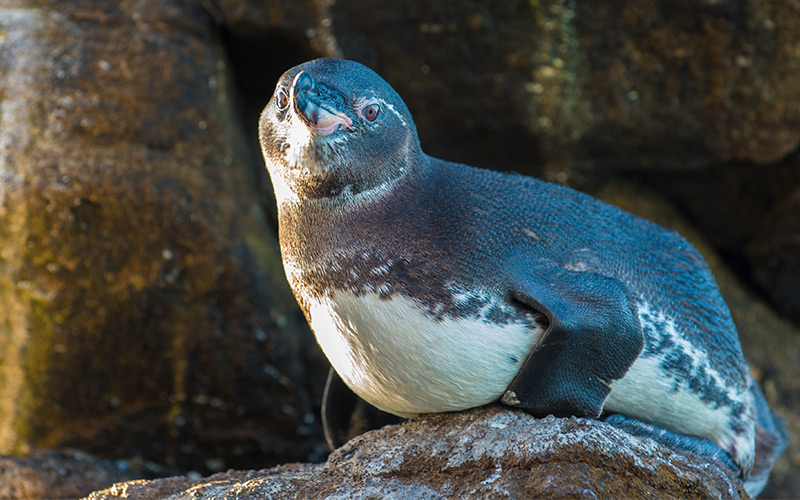 What do Galapagos penguins eat?

The Galapagos Penguin isn’t different from the other 20 odd species of penguin when it comes to diet. They like fish and lots of them! Being nutrient rich with plankton the Humboldt Current has an abundance of shoaling fish such as sardines, mullet, and anchovies. Even though they are among the smallest of all penguin species they can swim as fast as their cousins at speeds of up to 15mph and to depths of 25 feet to catch their prey.

When is breeding season for the Galapagos penguins?

These tropical penguins are also by far the rarest penguins in the world. They are highly endangered with just 2000 individuals left. They are still recovering from the particularly strong El Nino event of 1983 which saw 70% of them perish due to starvation and inability to reproduce. The El Niño weather pattern is brought on by a warming of the Pacific Ocean, meaning that the normal cold water fish that makes up the Galapagos Penguin’s diet greatly reduce in number. This is a double whammy for the penguins as not only do the adults starve but they also stop breeding when the sea surface temperature rises above 77F, as is the case during El Niño years.

The Galapagos Penguin is also threatened by invasive species such as rats, dogs and feral cats which either kill the adults and/or feast on the eggs and then also there is the issue that many of their nesting sites have disappeared. Galapagos penguins are related to 3 other species of penguins that burrow to make nests but as the Galapagos Islands have harder volcanic soils then instead the penguins have traditionally sought out cracks and crevices in the lava. But there is competition for these crevices from marine iguanas and sometimes volcanic eruptions wipe out large areas suitable for nesting.

The Galapagos Conservancy organization has recognized this problem and created a solution by building 120 “penguin condos”, high-quality shady nest sites and then monitoring the sites in subsequent years to see if they are in fact being used. By 2015, 13 of the new nests contained eggs or chicks. Doesn’t sound like a lot but when there are less than 1,000 breeding pairs of penguins then every new nest site counts!

Galapagos penguins mate for life and lay 1 or 2 eggs in cracks, caves, crevices or now the artificial nests as well. They can breed up to 4 times a year. The eggs must be protected from direct sunlight so the male and female take turns to incubate the eggs. Chicks are born after 40 days and leave the nest 20 days later. They remain dependent on their parents for food for a few months.

What is the best itinerary for watching the Galapagos penguins?

The highest numbers of Galapagos Penguins live on Isabela and Fernandina Islands, the most westerly islands in the archipelago. Your best bet for seeing the larger penguin colonies on these islands is to take a 7 day/8 night cruise most of which schedule visits to these rugged volcanic islands.

And who knows, if you pay close enough attention, you may even see Skipper, Kowalski, Rico and Private, the 4 penguins in Madagascar, sunning themselves in deck chairs soaking up the tropical sun just like their Galapagos cousins. 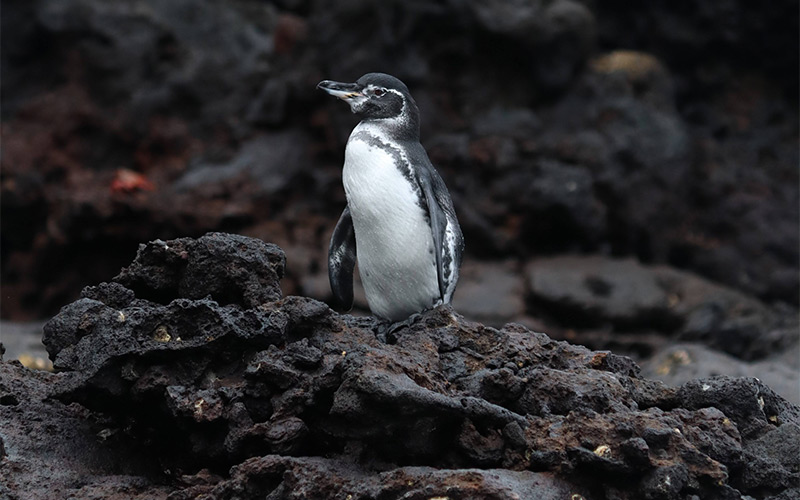 The highest numbers of Galapagos Penguins live on Isabela and Fernandina Islands, the most westerly islands in the archipelago. Your best bet for seeing the larger penguin colonies on these islands is to take a 7 day/8 night cruise most of which schedule visits to these rugged volcanic islands.

And who knows, if you pay close enough attention, you may even see Skipper, Kowalski, Rico and Private, the 4 penguins in Madagascar, sunning themselves in deck chairs soaking up the tropical sun just like their Galapagos cousins. 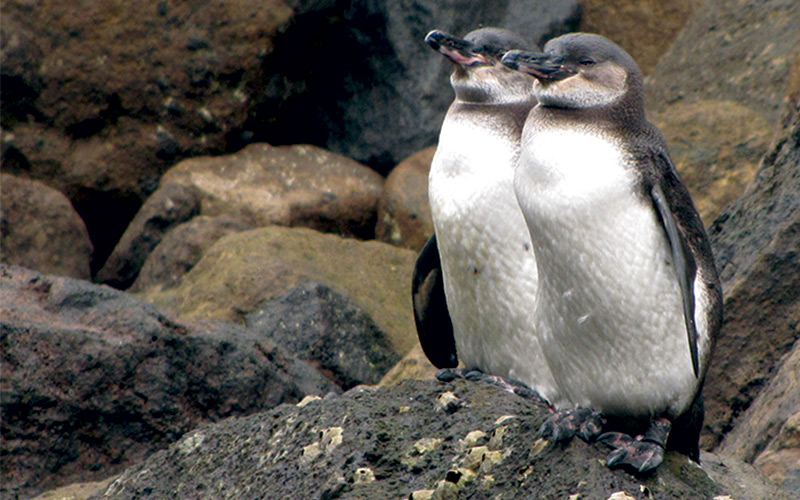 When we think of penguins, we immediately think of them waddling around on the ice sheets of Antarctica. But in reality, they live throughout the Southern Hemisphere – and one, the Galapagos Penguin – is even found north of the equator.

There are 17 species of penguins. They live in Africa, the South Atlantic islands, Australia, New Zealand and South America. They get their name from the Welsh, who first saw these birds on the Atlantic coast of South America. They called them pen (head) and gwyn (white). 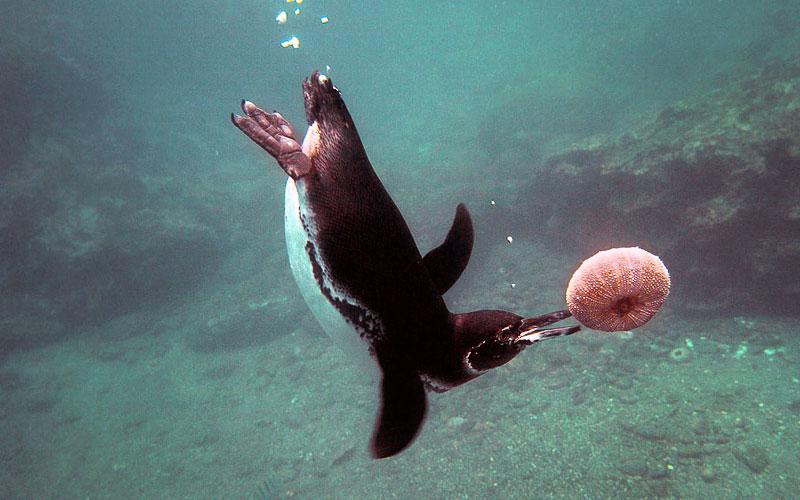 Along the Pacific Coast of South America, where the icy Humboldt Current flows, are the Humboldt Penguins (Spheniscus humboldti), found in northern Chile and Peru. These are the closest relatives to the Galapagos Penguin (Spheniscus mendiculus).

That cold ocean current brought them to these rugged Galapagos Islands, almost 1,000 kilometers (600 miles) off the west coast of South America. The Galapagos Penguins look very similar to their mainland cousins: They both are black-backed and headed with a white belly, and have a thin white line from the neck, curling towards the eye. 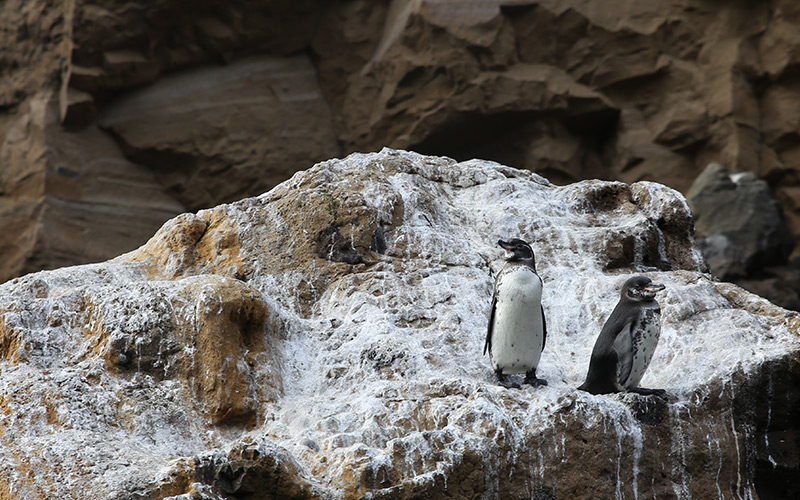 The Galapagos Penguin is the second smallest species in the world, measuring up to 49 centimeters (19 inches) in length and weighing 2.5 kilograms (5.5 pounds). It is also one of the most endangered.

Unlike other penguins, the Galapagos Penguin does not have a specific mating and nesting season. They may have up to three clutches, consisting of two eggs, in one year. Breeding is dependent on cold water temperatures and abundant food supply.

When the El Niño (ENSO) phenomenon hits the Pacific Ocean basin, the Galapagos Penguin population is hit hard. The warmer water temperature means less food, which leads to postponed mating. During the 1982-83 ENSO, 77 percent of the islands’ penguins starved to death. Another severe ENSO event could possibly wipe out the entire population.

The Galapagos Penguin also faces dangers from wild cats, dogs, rats and other introduced species. Fishing and garbage are human threats to them. 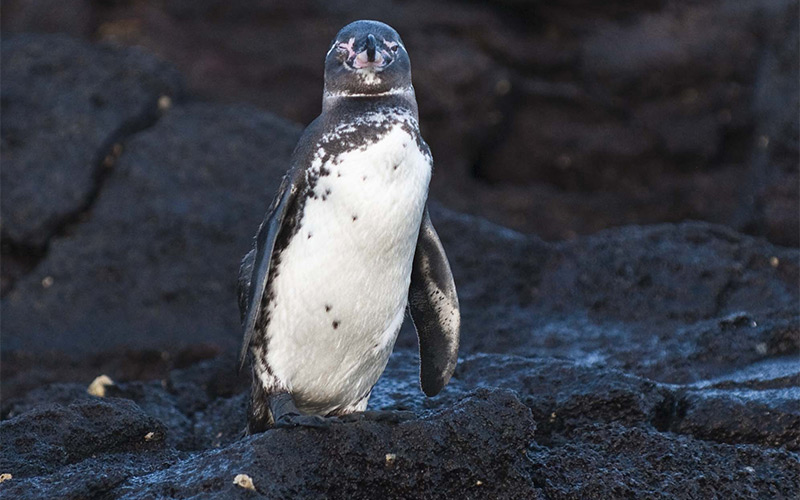 The Galapagos Penguin lives mostly on Isabela and Fernandina islands, though they may also be sighted on Santiago, Bartholomew, northern Santa Cruz and Floreana.

The Galapagos Penguin is one of the smallest species of Penguin and the only one ever found naturally north of the Equator. This endemic, flightless bird is an excellent swimmer: it will nimbly dart among the coral and rocks of Galapagos waters nipping up small fish with blinding speed. They are usually only found in the western islands and visitors to the Galapagos can see them on Isabela, Fernandina and Bartolomé Islands. 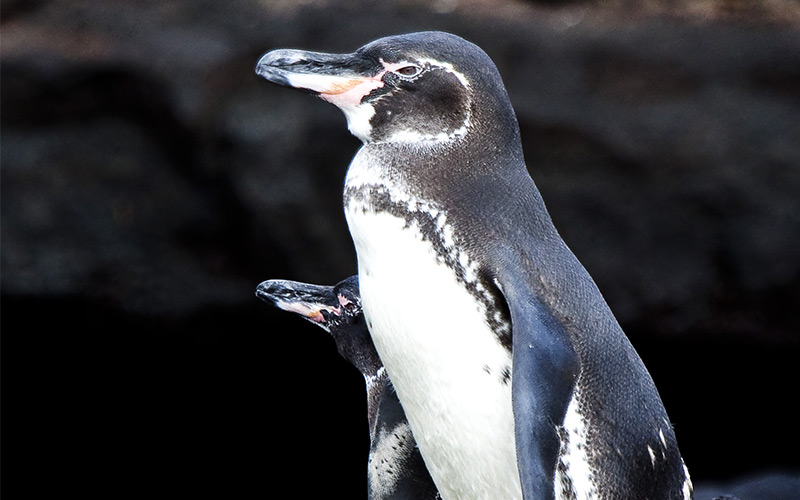 The Flightless Cormorants have much in common with the Galapagos Penguins and are often seen at the same visitor sites. They are also endemic, swimming birds who live in the western islands, diving down to eat small fish. Although there are Cormorants all over the world, the only place where they are flightless is the Galapagos. 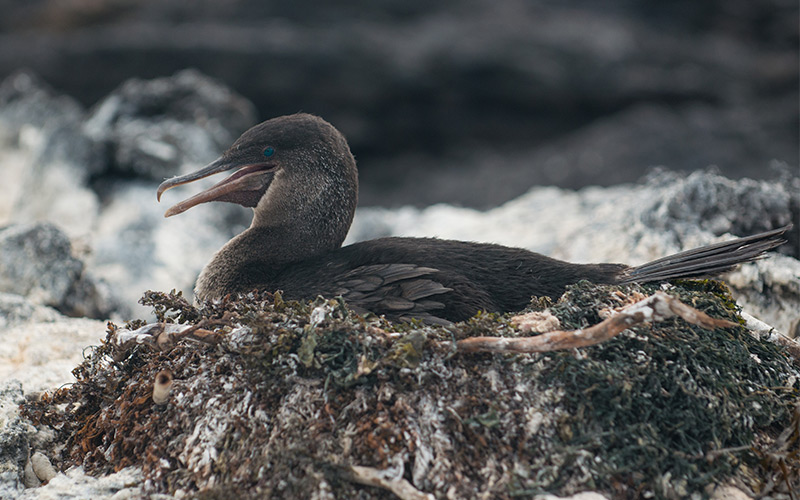