A tale of murder in The Enchanted Islands 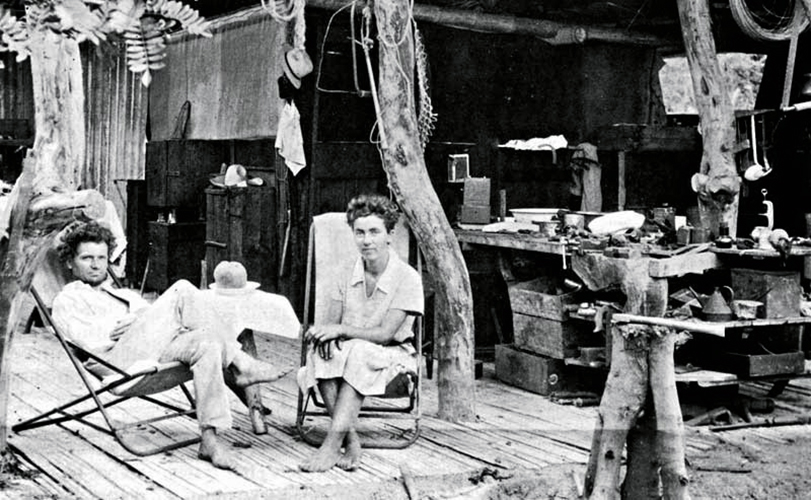 The Galapagos Islands (Enchanted Islands) is known today as a world-famous holiday destination attracting thousands of tourists every year to marvel at the fearless wildlife and beautiful island landscapes.
Floreana Island in the Enchanted Islands is the setting of a mysterious account of the eccentric settlers who lived on the island in the 1930’s. Living on a remote island years before the islands were well-known, their demise is still shrouded in mystery to this day. 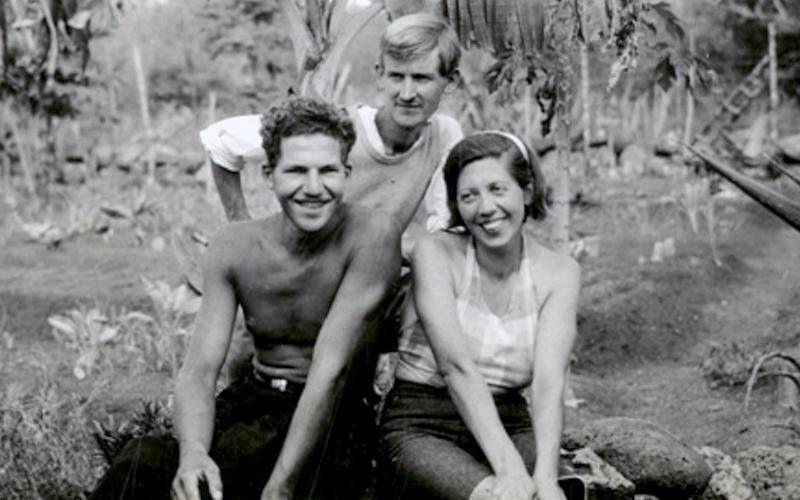 In 1929 the first settlers to arrive on Floreana Island were Doctor Friedrich Ritter and his lover Dore Strauch. Strauch met Ritter in Germany during her treatment for multiple sclerosis. The two fell in love and decided to run away together to the remote Galapagos Islands to begin a new life. They left their spouses and set sail for the Galapagos.

They lived a rather eccentric life on the island. They were both fans of Nietzsche’s writings and sought to establish their utopia on Floreana Island. They were vegetarians who cultivated their food in their garden and lived as nudists. Doctor Ritter preemptively removed his teeth before coming to the Galapagos to avoid dental problems. Dore’s teeth were pulled out with garden tools on Floreana after they began to rot, and it is rumored that the two shared a pair of steel dentures Ritter had made.

Their unorthodox way of life on Floreana Island soon attracted a lot of attention from the international press after passengers on passing boats stopped at Post Office Bay and reported about the unusual settlers. Ritter’s and Strauch’s stories were published in newspapers around the world and inspired another German couple to run off to Floreana and escape the unfavorable conditions of post-World War I Germany.

Heinz and Margret Wittmer brought their teenage son Harry to Floreana in 1932 to homestead on the island. Margret was pregnant, and her son Rolf who would be born in a cave on the island is the first person to have been born on Floreana. Dore and Margret didn’t seem to get along at all from the beginning, and the Wittmers were not allowed to homestead next to Ritter and Strauch.

The Wittmers settled at first in a cave which was an old pirate hideout and later built a house. Respecting each other’s space, the two groups seemed to get by on the island with little to no contention although not exactly on friendly terms. The whole affair was about to get quite strange however with the arrival of the third group of settlers the next year.

In 1933 the eccentric and outright bizarre self-proclaimed Baroness Eloise Wehrborn de Wagner-Bosquet arrived with her two lovers, Rudolf Lorenz and Robert Phillipson, and their Ecuadorian manservant Manuel Valdivieso. Unlike Ritter, Strauch, and the Wittmers who had come to the Galapagos to reconnect with nature and live a peaceful life, the extreme Baroness was preoccupied with money, fame, sex, and establishing a luxury tourist resort on the island. 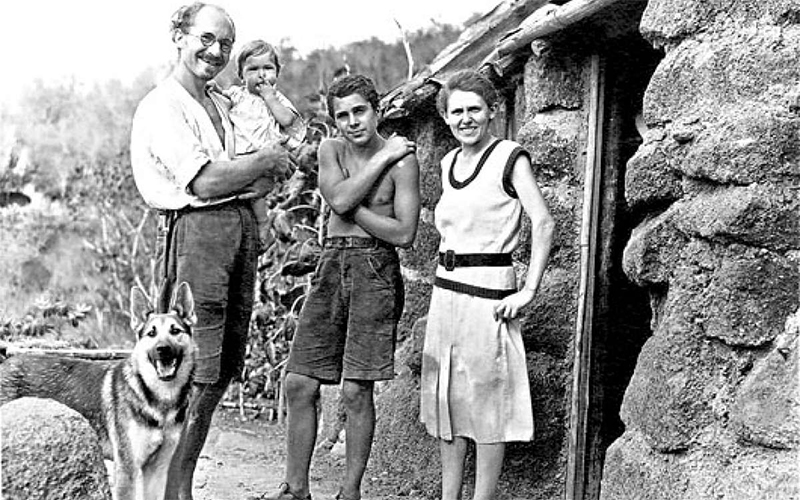 The Baroness certainly caused a lot of friction among the other settlers from the very start. She proclaimed herself the Empress of Floreana. She carried around a whip and pistol and acted as an authoritarian figure on the island. Her extreme lifestyle soon gained a lot of attention, and she easily took the spotlight from Ritter and Strauch.

In addition to her other outlandish ways, she also stole supplies from the other settlers. She also shot a visitor to the island on a hunting trip, allegedly on accident, and was quick to turn away others who came to the island. A pair of honeymooners came ashore on Floreana after mistakenly drifting off course from another island. The Baroness refused them aid and sent them off to sea.

She didn’t mind the attention she got from reporters and millionaires whose yachts stopped by at Floreana, however. She made up lies about Ritter which further exacerbated the clash between them, and she often seduced yacht captains and various male passengers aboard the visiting boats. Her scandalous lifestyle and her announcement in the international press about her plans for the luxury resort on the island soon attracted even more yachts.

The Wittmers, for the most part, had little interaction with the Baroness and her entourage since they lived on the other side of the island. Ritter, on the other hand, infuriated with the Baroness badmouthing him, didn’t conceal his hatred for her and blamed her for ruining the isolationist lifestyle he and Dore sought to live on Floreana Island.

The other island settlers were fed up with the Baroness’s behavior and sent word to the Governor of the Galapagos who went to Floreana to investigate the situation and ended up being seduced by the Baroness. Needless to say, he left the island with nothing bad to say about her or her scandalous ways.

On the 27th of March, 1934, the Baroness and Phillipson mysteriously vanished and were never seen or heard from again. Margret Wittmer claimed that the Baroness told her that her millionaire friends were taking her and Phillipson on their yacht to Tahiti, but the story doesn’t match up. No one ever saw a yacht come by, and all their possessions were left behind.

Dore Strauch claimed that Lorenz murdered the Baroness and Phillipson and the Wittmers helped him cover it up. Of course, this strained their already slightly bitter relationship. Margret Wittmer talked about Ritter’s hatred of the Baroness and how he and Lorenz suspiciously split up the possessions they left behind. In a way, she pointed fingers at Ritter, although she stuck to her story about the yacht that took them to Tahiti.

They were never seen on Tahiti, and both Manuel Valdivieso and Rudolf Lorenz claimed to know nothing and never said anything. Valdivieso ran off on the very next boat to visit Floreana and seemingly returned to mainland Ecuador. Soon thereafter Lorenz convinced a Norwegian fisherman named Nuggerud to take him to San Cristóbal to catch a ferry to Guayaquil.

Lorenz and Nuggerud made it to Santa Cruz, bought supplies, and set sail for San Cristóbal, but then they mysteriously vanished too. Months later their mummified bodies were found on the beach of Marchena Island which is located far off track from the route to San Cristóbal. To this day, no one knows how they ended up on Marchena.

The unusual deaths didn’t end there. In November of the same year, Friedrich Ritter died as well. The official reason is listed as food poisoning from eating spoiled chicken, but this seems quite strange. Ritter was a vegetarian. Strauch claimed that drought on the island led to their vegetable scarcity, so she and Ritter boiled some dead chickens they had found. The Wittmers thought it was all very strange and suspicious that he was dying while Strauch was perfectly fine.

In their memoirs, both Dore Strauch and Margret Wittmer write about being at Ritter’s bedside when he died. Their accounts of what happened couldn’t me more different. Strauch writes about a loving exchange of tenderness at Ritter’s deathbed while Wittmer claims that he glared at Strauch with hatred and wrote his last sentence, “I curse you with my dying breath,” in the last moment of his life.

Strauch went back to Germany after Ritter’s death and died there in 1943. The Wittmers stayed on Floreana and made a fortune years later during the tourism boom. Today their descendants still live on Floreana Island. Margret Wittmer stayed on the island until she died in 2000 at the age of 96. She never changed her story, and whatever secrets she may have kept going with her to the grave.

This bizarre mystery of murder and betrayal adds quite a colorful chapter to the history of the Enchanted Islands. When you visit the Galapagos Islands, you can see historic places on Floreana Island such as Post Office Bay and the sites of the first homesteads on the island. You can step back in time and imagine what it was like on Floreana in the 1930s with the island’s unusual cast of eccentric characters.