Most Galapagos sites are known primarily for animals, geology or natural beauty. Who can argue? The Galapagos Islands are home to many fascinating animals and birds, including sea lions, blue-footed boobies and the remarkable Galapagos Penguin.

However there has always been a human side to Galapagos as well: not all of the history of the islands is measured in geologic time. Floreana Island is where you’ll find some fascinating local history: not only was it the site of the famous Galapagos Affair but it is also where you’ll find Post Office Bay.

The history of the postal barrel

Centuries ago, great whaling ships would take to the seas to hunt these magnificent creatures. The ships would spend years at a time catching whales and processing them for their oil, which was very valuable. Only when the ship’s hold was full of barrels of whale oil would the ship return to port.

The Galapagos Islands were a natural stopping point for these whalers, as there they could pick up water and food. Often, unfortunately, the food they picked up was Giant Tortoises, which would eventually become extinct on Floreana Island and elsewhere.

The whalers were often homesick, but communication was a problem. They devised a clever solution: they left letters in a certain place on Floreana, and when passing ships stopped there on their way back to England, the USA or wherever their home port was, they would pick up all the letters destined for that place and deliver them. In some cases, letters would take years to deliver! The place on Floreana where the letters were left became known as Post Office Bay.
he most amazing part of this historical tale is that the system is still working! Every year, thousands of Galapagos visitors drop off letters and postcards in Post Office Bay. Other visitors headed close to an addressee will pick up the letters and take them home.

Occasionally, those who pick up the letters simply put a stamp on them and mail them, but traditionally, if you pick up a letter addressed to someone who lives near your home, you’re supposed to hand-deliver it…and tell the tale of how it got there! There is more to the bay than just the famous mailbox, however. Not far from the post office is a lava tube: a natural cave made ages ago by flowing lava. It is possible to explore this ancient cave. Nearby are the ruins of a small Norwegian fishing village established in 1926. The fishermen who came were hardy and tough but the challenges of living on Galapagos proved too much for them. 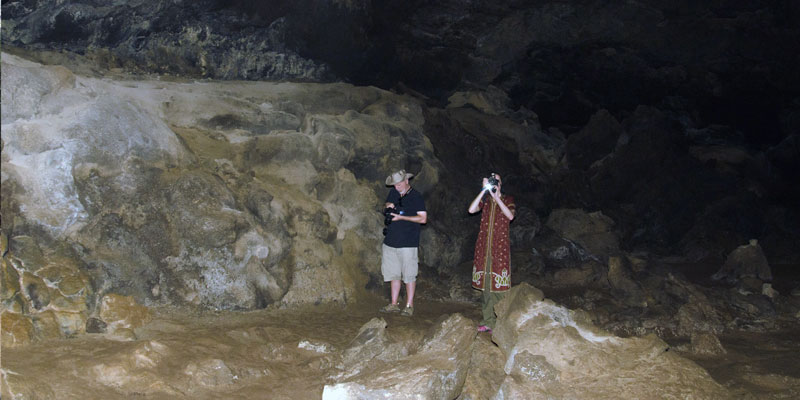 Included in the visit to Post Office Bay is a dinghy ride along the nearby mangroves and coves. Lucky visitors will see sharks, rays, turtles, and sea lions in the water and cacti on the land.

Most dinghies stop at the “Baroness Viewpoint” where visitors have a nice view of Floreana topography and the bay itself. It is named after the famous Baroness Eloise Wagner de Bosquet, one of the participants in the sordid “Galapagos Affair”