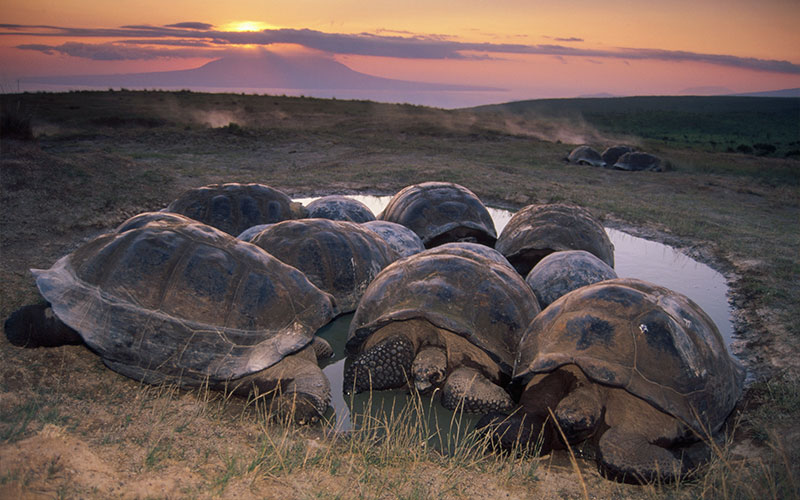 In the middle of the Galapagos Islands coat of arms is the image of a tortoise, perfectly apt because the islands are named after the Galapagos Giant tortoise. Well actually galápago means terrapin in Spanish but the first Hispanic mariners were not splitting hairs at that time and probably intent on avoiding confusion with other islands already named Tortuga.

But you have to hand it to those first intrepid mariners; they couldn’t have found a more emblematic animal for the islands. Giant Galapagos Tortoises would have been crawling around everywhere when they arrived and were very convenient for supplies of meat. There were no cows or goats when those first mariners arrived so they set about feasting on the largest herbivores present, giant tortoises, quickly driving the reptiles to an ever more endangered state.

Nowadays when Galapagos visitors arrive it is probably fair to say that there is just one animal that everyone wants to see and that is the Galapagos Giant Tortoise. Visitor’s interest stoked and curiosity piqued by the fame of Lonesome George and to a lesser extent Super Diego, the tortoises have become ambassadors for the islands. Lonesome George in particular captured the imagination of nature lovers and children around the world – Lonesome George was the epitome of pathos in the form of a giant tortoise.

Hundreds of thousands of articles were written about Lonesome George and he became a conservation icon, designated the loneliest animal in the world, surely a plight that encapsulates the challenges facing humans as guardians of this fragile planet.

As such, Lonesome George helped to make the Galapagos Islands become a premier ecotourism destination. With George’s death in 2012 you might imagine that he’d be quickly forgotten but around the world articles continued to be written about how he was preserved by a famous taxidermist, a documentary was even made on the whole process.

After an initial dispute between the Galapagos authorities and the national Ecuadorian government it was finally decided his beautifully stuffed remains would be displayed in the aptly named “Symbol of Hope Exhibition Hall in Puerto Ayora. As millions of readers and viewers took interest in his sex life in his ultimate years George probably deserves to “Rest in Peace” more than most reptiles.

With all the interest in Lonesome George you could be forgiven for thinking that Galapagos Giant Tortoises are either all in captivity or all on the cusp of extinction. Not true! The reality is a mixed bag of affairs.

There are 11 surviving species out of the original 15 species. They were already large animls when they arrived on drifting vegetation rafts 2-3 million years ago contrary to an earlier belief that they had evolved to be very large due to island gigantism, a phenomenon caused principally by lack of predators. What happened to their mainland cousins from millions of years back can only be guessed but you have to think that they were eaten by early homo-sapiens – hey, what would you rather do, go hunting for woolly mammoths or sabre-toothed tigers or upend a “delicious meat” large tortoise?

Galapagos Giant Tortoises spread to the largest ten islands and thrived until we humans put a metaphorical spoke in their wheel of existence. Buccaneers preying on Spanish treasure galleons, whalers and fur sealers found that tortoise meat was “delicious” and even better, that the giant tortoises self-preserved in a ship’s hold for up to a year – the perfect maritime provision.

From a total of hundreds of thousands of tortoises pre-human intervention there are just 20-25,000 wild tortoises living on the islands now. They are probably not about to die off in the coming years but if they are not part of a good conservancy plan then they may become endangered in the future.

In effect the Galapagos Islands are the only place where you can see giant tortoises in the wild because a distinct species living on the Aldabra Atoll in the Seychelles is shut off from human encroachment for conservancy purposes. In the Galapagos the giant tortoises live wild on Isabela, where there are 5 species each living on different volcanoes on the island, 3 species live on Santa Cruz Island, one species on Española and one species on Pinzón Island.

That there are Giant Galapagos Tortoises of the Española and Pinzón species is a miracle. Rats had virtually wiped out tortoises on Pinzón Island by the early 1960s. There were just 100-200 very old adults and all eggs laid and any hatchlings had been eaten by the rats during the course of many years. The longevity of the tortoises is what saved them as new eggs were collected and incubated and hatched back at the Chares Darwin Research Station during the late sixties. These hatchlings were reared in captivity leading the way for similar programs to be introduced for threatened giant tortoise populations on other islands.

The situation on Española was catastrophic, although it has to be noted not as catastrophic as that of poor old Lonesome George who was the last of the Pinta Island tortoises. On Española only 14 tortoises were left! There were so few they couldn’t find each other even if they did want to mate; that right there could be the definition of tragic.

Over 11 years scientists found all 14 tortoises, 2 males and 12 females, and took them away to Santa Cruz Island Tortoise Center. The males, being slightly out-numbered, were joined by Super Diego an Española tortoise in captivity in San Diego zoo. Diego earned his epitet by fathering hundreds of Española tortoises, his sex drive literally saving a race of Galapagos Giant Tortoises. Way to go Diego and well done to the females for supporting his amorous advances.

Lonely George and the Pita tortoises were not so lucky. Ditto the Floreana Island tortoises. They have gone the way of the Dodo … or have they? A recent blog post describes how new DNA advances and new field research means that it may be possible to genetically engineer these two species, scientifically raise them from the dead, so to speak.

Galapagos Giant Tortoises come in two distinct forms. Those that live or lived in the lowlands where there is less rainfall during the year and therefore a drier, thornier, less succulent foliage at ground level evolved to have longer legs, very long necks and a saddleback carapace. These tortoises were more threatened because they were easier to capture as they lived closer to the island shores. The larger dome-backed giant tortoises live in the highland interiors where due to more rainfall there is more foliage at ground level and no need for a long neck and longer limbs.

Whether you visit these giants in the highlands of Santa Cruz, in the tortoise breeding center of Puerto Ayora or on the slopes of Volcan Sierra Negra on Isabela Island you’ll be fascinated by these emblematic reptiles whose enduring story is intertwined with the history of human settlement on the Galapagos Islands and likely will continue to be so.