Las Tintoreras. Such a small location but such huge biodiversity! Typical of Ecuador of course, as it’s the most bio-diverse nation on the planet. But honestly … you’d have to go to your local zoo before you found more animals in such a small area – and zoos don’t count. We’re talking animals in their natural habitat here!

Las Tintoreras is a group of small islets the largest being 900 meters long and an average width of just 100 meters. The smallest – well, should we even call it an islet? It’s a large rock! Not that that matters to the Marine Iguanas, Galapagos penguins, Blue-footed Boobies, Galapagos Sea Lions and marine turtles which all seemingly adore the rocky-lava landscape Tintoreras.

Isabela is the largest island in the Galapagos and along with Fernandina, they are the newest of the Galapagos Islands. It is geologically young at one million years old and was formed by the merger of six volcanoes of which 5 are still active. The largest settlement is Puerto Villamil on the southeast coast which has a gorgeous almost-deserted white sand beach that you really ought to stroll along letting the gentle waves lap your ankles.

Just offshore from Puerto Villamil are Las Tintoreras. They are so close you can see them in the distance which is reassuring as you walk down the sturdily constructed jetty to get into your colorful panga, a small speedboat, with its canvas shade roof.

The waters here are calm, crystal clear most of the year and a radiant turquoise and as the skilled helmsman steers out of the harbor past moored boats with sea-lions asleep on their decks you can’t help asking yourself if these fun-loving mammals really are the greatest sunbathers of the natural world.

You’ll likely also pass by nearby rocks on the mainland coast and the helmsman will throttle down to let you get a good look at blue-footed boobies, pelicans and Galapagos Penguins, the only penguins that live at the equator, all stood just a few feet apart from each other cleaning their plumage. Then the bow of the panga turns south and opening the throttle on the outboard motor allows the islets to quickly edge closer before you arrive at the northern end of the largest Tintorera islet.

This is typically a wet landing where you slip off the side of the panga into shallow waters and wade to the small beach where a well-signed pebble nature trail awaits. It’s a strange alien landscape, dark volcanic rock, covered on one side with white lichen, from ancient lava flows sitting on top of a sand base and many of the shores are lined by mangroves.

Alien for us that is. Not so much for Marine Iguanas, black and devilish looking, that absolutely love this rocky outcrop. There are hundreds and hundreds of them everywhere and they seem impervious to human presence, so much so that they won’t move out of your way and you’ll need to watch your step so you don’t tread on one.

Las Tintoreras is one of the few places in the world where they can reproduce successfully. This endemic reptile is perhaps the strangest of the strange Galapagos residents. It is the only lizard that has adapted to eat a marine diet. It can hold its breath for an hour while it forages for algae at depths of up to 65 feet. Marine Iguanas are descended from mainland ancestors but have been species-distinct for up to ten million years so they first inhabited islands in the Galapagos chain which now no longer exist as those islands eroded and slipped beneath the ocean surface with the passage of millions of years. 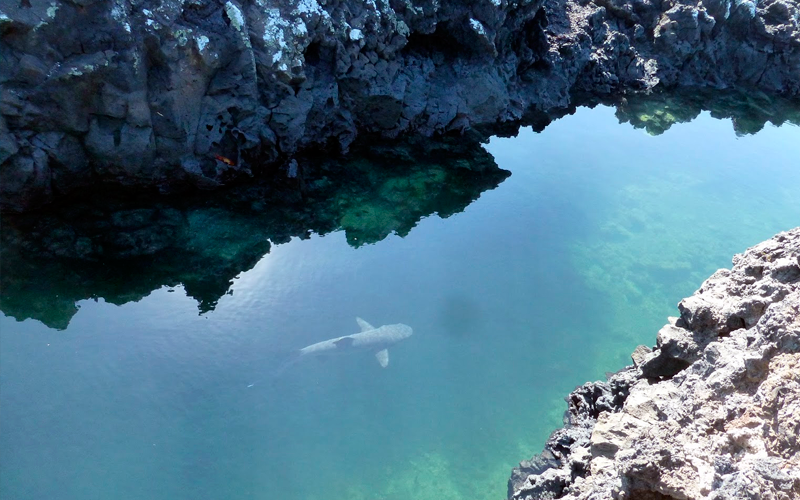 The other animals that are seemingly everywhere are little red crabs scuttling nervously over the lava rocks. These are Sally Lightfoot Crabs which are native to the Galapagos. They feed on a varied diet that includes but is not limited to sea lion placenta (Oh my!) and ticks on Marine Iguanas. That alone probably explains why there are so many here as there are certainly a ton of Marine Iguanas present.

At one point on the trail, there is a narrow channel just 2-3 meters wide between two arms of lava, an interesting geographical feature filled with shockingly clear seawater. Look closely below and you will see the animal these islets are named after. Seemingly asleep are tintoreras or white-tipped sharks. About 4 feet long they have found the perfect resting spot in this narrow channel and only occasionally move, perhaps bothered by an overly playful sea lion charging along the channel.

They are not dangerous and have never been known to attack people apart from when spear-gun fishermen have inadvertently caught their prey. Well, you know, that kind of gets most of us mad, having our food whipped away from us just as we are about to eat. This is useful information as nearly all tours to Las Tintoreras have a scuba diving component.

You’ll likely want to be wearing a wetsuit as the water can be a little cool but this is not to be missed as some visitors to the Galapagos rate snorkeling at Tintoreras as good as or better than scuba diving they have done before. The high visibility crystalline waters allow you to get up-close-and-personal with sea turtles and marvel at agile and playful sea-lions underwater proving they are split personality animals, hyper underwater and sloth-like onshore.

There is also a myriad of flittering, colorful reef fish along with stingrays, white tipped sharks and even barracuda against a backdrop of sponges, starfish, and corals. If you have a waterproof GoPro camera this is your excuse to whip it out of the backpack before entering the water – back home your friends will think you were swimming in an aquarium. Visitors often use the expression ‘privileged to be in the water’ when talking about their snorkeling in Las Tintoreras.

There is even the possibility to hire kayaks in Puerto Villamil and cross over the channel to the moonscape Tintoreras. You’ll need a guide of course but this might be the easiest and most rewarding kayak trip you could do in the Galapagos.

Most tours are done in a morning or afternoon and before you know it’ll be time to head back on the panga to Villamil. This tour is perfect for wildlife lovers and visitors of all ages – a metaphorical snapshot of Galapagos charm. 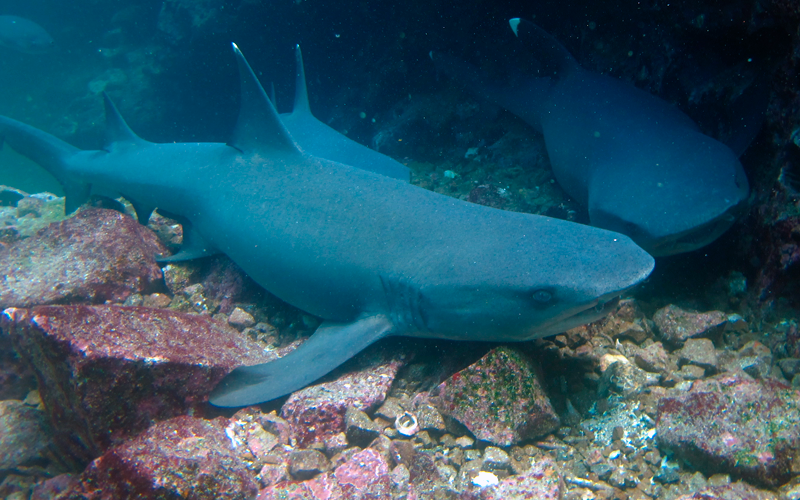