Charles Robert Darwin was born on February 12, 1809, in the merchant town of Shrewsbury, England. He was the fourth of six children. Science in his family was a heritage starting with his grandfather Dr. Erasmus Darwin, a well renowned botanist, and his father Dr. Robert W. Darwin, who was a medical doctor.

Charles Darwin childhood was of wealth and privilege, giving him the facility to enjoy his favorite hobby, exploring the wonders of nature.

In October 1825, that Charles Darwin and his brother Erasmus decided to attend the Edinburgh University. After two years he decided to study at Cambridge’s Christ’s College, destined initially for a life in Holy Orders. After finalizing his studies in Cambridge he embarked on the HMS Beagle, to start one of the most important journeys in the history of humanity, which inspired Charles Darwin to write his most seminal work, “The Origin of the Species”. 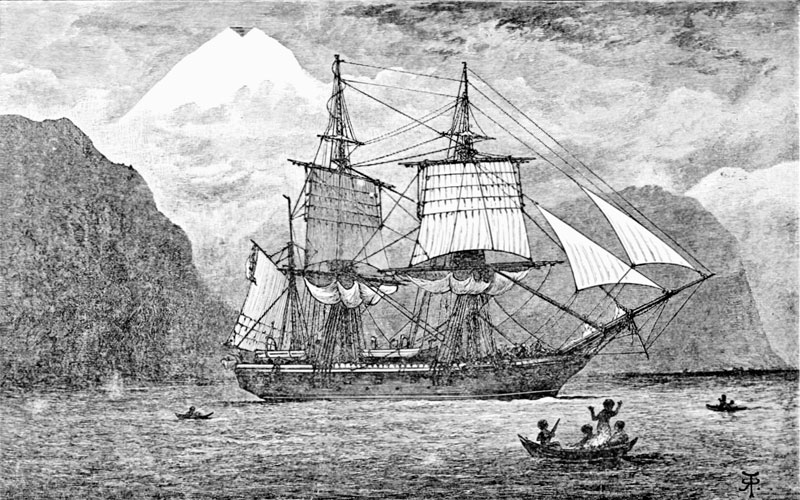 The Voyage of the HMS Beagle​

After the finalization of the Napoleonic Wars, Britain found itself as the only nation with a large navy to police the seas, and the focus turned from making war, to making trade safe for their growing empire. This endeavor was accomplished by suppressing piracy, discouraging the slave trade, and charting the oceans. The most important of them was the creation of accurate charts and maps of the coastlines and harbors around the world.

At the time much of South America’s coastline remained uncharted, and as new trade relations were being established with South America, the creation of accurate charts and maps of the region was one of the top priorities.

Once the Hydrographic Office was founded the British Navy had its own map department, engravers, and printing facilities. However, the maps produced were still of modest quality, and errors were quite common. Capt. Thomas Hurd realized that most of the naval officers directly engaged in survey work did not have the appropriate knowledge for chart making. Therefore he realized that an elite corps of dedicated officers was needed.

It was then that Capt. Hurd after a very careful selection bounded a group of scientific and mathematical officers to accomplish Britain’s chart making endeavors.

At the beginning everything was running slowly as it turned out to be really difficult to recruit Masters and Midshipmen who had the required experience and qualification for this kind of technical work. When Captain Hurd finally assembled a group of qualified men to take on the endeavor, and on 7 January 1817, he founded the “Corps of Surveying Officers.” Along with this new naval officer came a new fleet of survey ships, and on 16 February 1817 six Cherokee class brig sloops were ordered to be built for the survey service.

One of these survey ships was to be named H.M.S. Beagle. 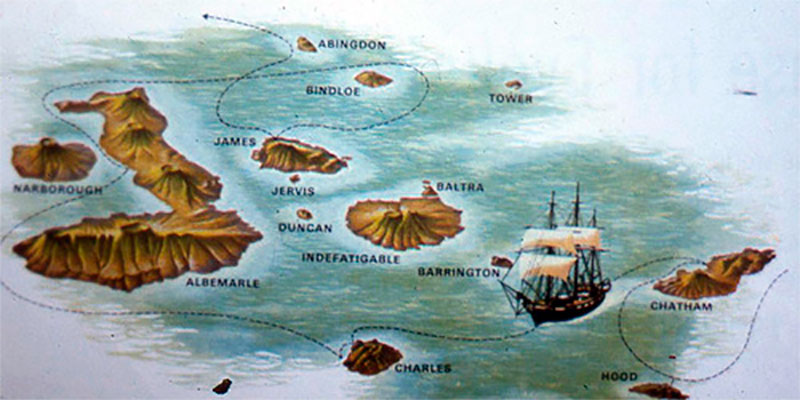 Darwin got more than he bargained for when he visited the Galapagos Islands! He may have come for the volcanoes, but it would be the unique Galapagos wildlife that would leave a more lasting impression.

Darwin and the HMS Beagle were in Galapagos during September and October of 1835, and during this time, Darwin had the opportunity to explore a handful of islands, and he collected several Galapagos species for use in his research and that of his friends back home. These species would eventually be used to illustrate Darwin’s controversial theories, and the Galapagos Islands have had a privileged place in natural history ever since.

Darwin’s Galapagos expedition was, in one sense, not unlike the visits enjoyed by thousands of modern visitors every year. The Beagle itself was far too large to land, so it cruised around the islands and smaller boats would take Darwin and the other crew members ashore, where they could mingle with the endemic wildlife. Modern ships such as the Natural Paradise follow a similar pattern, sending guests ashore in small, easy to use pangas or zodiacs.

So where did Darwin go and what did he see? Here’s his Galapagos itinerary:

On September 15, the land was sighted: it turned out to be Mount Pitt, part of San Cristóbal Island. Darwin first went ashore in Galapagos on September 18, while the crew captured several San Cristobal giant tortoises for food. Darwin was intrigued by the tortoises and collected a handful of plant specimens. Darwin was impressed by the rocky island and the lava that formed it. He also spent one night on the island and found exploring in the great heat to be fatiguing. He mentioned seeing a few “dull-colored” birds: presumably, the famous finches that would later bear his name!

Floreana was an Ecuadorian penal colony at the time, managed by an Englishman, Nicholas Lawson. The crew of the Beagle was allowed to go ashore and on the 25th, Lawson gave them a tour of the colony. Darwin diligently collected many animal and plant specimens here and was told by Lawson that it is possible to tell from which island a tortoise came from merely by looking at its shell. In his journal, Darwin remarked that the convicts regularly ate tortoises and that whaling ships and pirates often took them: one such ship carried off 700 Floreana tortoises to eat while at sea. By 1846 the race was extinct.

During these days, the Beagle tried to get to Abingdon Island but was repeatedly foiled by currents and winds. The Beagle did not anchor at any of these islands and instead decided to head for James (Santiago Island), as they were running low on water.

The Beagle found no water on James and headed back to Chatham to resupply. Darwin, the ship’s physician Benjamin Bynoe and each of their servants remained behind. They had a tent and provisions and spent the week exploring and gathering samples. It would be Darwin’s longest stay on any of the Galapagos Islands. Some helpful Ecuadorians showed him around, taking him to a small salt flat.

He collected many specimens, including some fish, snails, several varieties of birds and reptiles, and some insects, although he remarked about how few insects were to be had. It was about this time that Darwin realized that the different islands were home to different species: he had, until then, not been carefully labeling his specimens, as he believed at that time that all of the species lived on all of the islands.

After picking up Darwin’s party, the Beagle went back to survey the eastern coast of Isabela Island before going to Abingdon (Pinta) to pick up another party that had been surveying in one of the smaller boats. On October 20, they surveyed Wenham (Wolf) and Culpepper (Darwin) before setting sail for Tahiti: Darwin did not set foot on Culpepper, the Island that now bears his name. 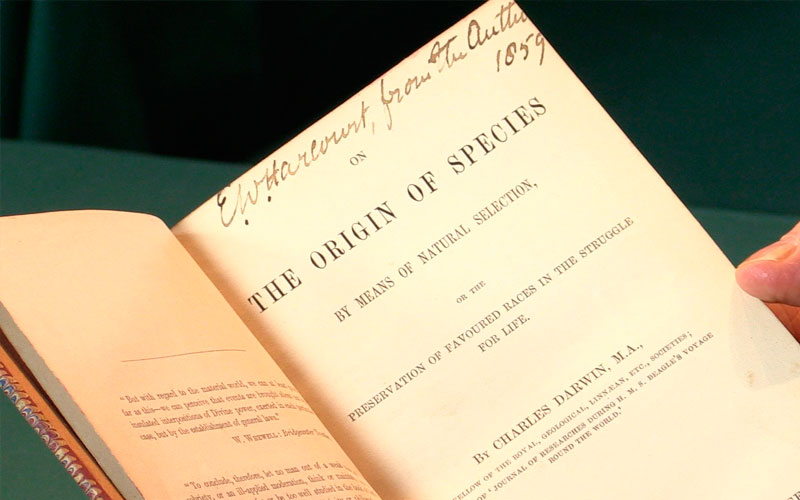 Charles Darwin & The Origin of the Species​

The name of Charles Darwin and his famous book “The Origin of Species” will forever be linked with the Galapagos Islands. Although he was only in the Galapagos for five weeks in 1835, it was the wildlife that he saw there that inspired him to develop his Theory of Evolution. Today he is remembered in the Galapagos Islands with numerous statues, important streets named after him, and more than a few islanders named “Darwin.” But how much of Galapagos made it into his controversial book?

Darwin was inspired in Galapagos

In chapter two of “The Origin of Species”, Darwin claims that it was his visit to the Galapagos that helped inspire his theories. “Many years ago, when comparing, and seeing others compare, the birds from the separate islands of the Galapagos Archipelago, both one with another, and with those from the American mainland, I was much struck how entirely vague and arbitrary is the distinction between species and varieties.”

The idea of endemic species – that is, species found only in one specific place and nowhere else on earth – was central to Darwin’s arguments. Here he once again used The Galapagos Archipelago and other islands to prove his point. He wrote,

In other words, the endemic species that had evolved on remote islands proved his point as they adapted over long periods of time to a new environment, leaving behind their original characteristics.

Darwin was increasingly frustrated with the Creation Theory which for him could not explain the presence of certain plants and animals in some places and not in others. The animals he found and did not find on the various islands led him to believe that his theories of evolution were much closer to any sort of logical truth.

Here he discusses the lack of frogs on certain islands,

Surprisingly, Darwin does not dwell on his famous finches much in The Origin of Species. His earlier journal, Voyage of the Beagle, however, shows the crucial role these finches played in his theories. He stated, “The remaining land-birds form a most singular group of finches, related to each other in the structure of their beaks, short tails, form of body and plumage: there are thirteen species, which Mr. Gould has divided into four subgroups. All these species are peculiar to this archipelago; and so is the whole group, with the exception of one species of the sub-group Cactornis, lately brought from Bow Island, in the Low Archipelago.”

He later summarized his interpretation of the nature of these finches.

Darwin and the Galapagos Islands

Reading Darwin’s works, it is easy to see the enormous impression that the Galapagos left on the young naturalist even though his visit was very brief. It was a mutually beneficial relationship! The Islands provided Darwin the proof he needed for his groundbreaking theories, and in turn, Darwin provided the islands with a unique place in natural history, putting the remote islands “on the map”. Who can doubt that much of the current tourism boom in the islands is owed to Darwin and his once-radical theories?

Visit the same place that inspired Charles Darwin’s groundbreaking theories, the Galapagos Islands! You can follow in the steps of Darwin via cruise, personalized island-hopping, or a combination of both. Contact a trip advisor now to find out more!