When is a Royal magnificent? We’re not talking about some stand-out European prince or princess here but rather the Galapagos Royal Frigatebird or the Magnificent Frigatebird as it is often called. Bedecked in royal robe colors with the shoulder plumage of the males glistening purple in sunlight and with 7 foot wingspan spread, this truly is a magnificent addition to Galapagos wildlife while the royal ermine-white breast of the female complements the males’ purple robes.

French mariners gave frigatebirds their name as it comes from La Frégate a fast warship often used by pirates. True to name frigatebirds are fast and do ‘attack’ other birds to rob the food in their bills or scare them into regurgitating food they have just swallowed. The poor booby’s in the Galapagos are the birds that are most attacked and even Christopher Columbus noted this during his first voyage across the Atlantic in 1492.

There are frigatebirds spread all around the world in tropical climates. There are 5 species of frigate bird and the Magnificent Frigatebird is found in several places in the Eastern Pacific including on the mainland Ecuador coast. Frigatebirds are fantastic aviators, highly evolved (more of which later) to fly hundreds, even thousands of miles at sea.

Of course, this instantly throws up new issues. Until now Magnificent Frigatebirds on a worldwide level were classified as being ‘Least Concern’ status on the endangered species list. Now, with the publication of this study the 1,000 breeding pairs on the Galapagos should probably be considered as very vulnerable; it wouldn’t take much to wipe them out – maybe more frequent occurrences of El Niño or a catastrophic human related event such as a very large oil spill.

It is incredible that all these years after the Galapagos became famous after Charles Darwin’s ‘On the Origin of Species’ was published, that as recently as 2010 new evidence is turning up to prove just how unique the Galapagos Islands are.

The upside of course is that Magnificent Frigatebirds are easier to watch on the Galapagos Islands. You can see them up close and personal on Genovesa, San Cristobal and North Seymour when they start to mate.

The mating and courtship starts as early as March when the males stay on land to inflate their red throat pouches. It’s a process that takes up to 30 minutes for each bird and meanwhile the females are flying serenely above looking for a choice male. The more the females fly over the crazier the males become, extending their wings the full six foot span, shaking their heads, opening their bills and shrieking to the skies.

Does a larger, redder throat patch mean that one male is stronger than another? Only the females know why they choose a certain male but once they decide they too land and breeding takes place and these normally silent birds make a drumming noise. One egg is the result and the males and females share parental duties for the first 3 months before the male takes off. Typical! 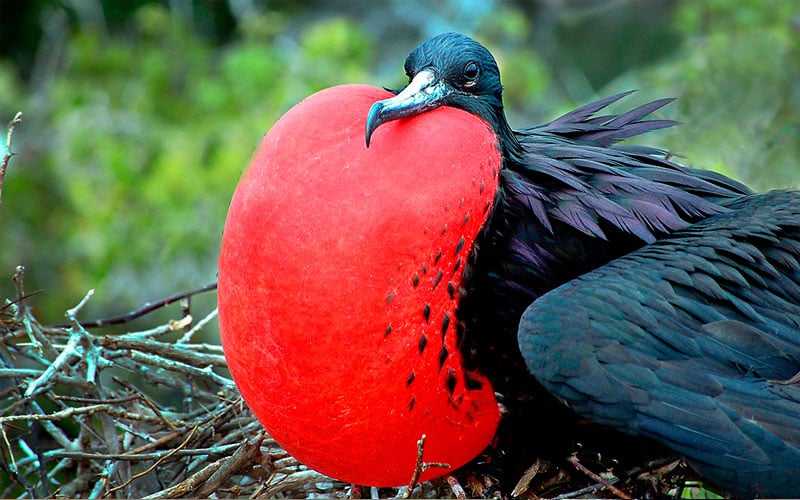 Although albatrosses have a larger wingspan than frigate birds they are not as perfectly evolved for effortless flight as the frigatebird family. The Galapagos Royal Frigatebird has the largest wingspan compared to body weight of any bird in the world and, as a result, using thermals it can fly extremely high and glide over great distances.

Although it is speculated that albatrosses sleep in flight it is actually known that frigatebirds catch forty winks as they fly. German and Swiss scientists attached small ‘neurologgers’ on to the heads of some frigatebirds to measure brain wave activity. They also were able to measure when the frigatebirds were flying. They found that frigatebirds sleep in short ten second bursts with half their brains. The other half stays awake to watch out for prey and make sure there are no mid-air collisions or crash landings into the ocean. Maybe being ‘half asleep’ is actually smarter than it sounds.

Watching out where they are going is very important for all frigatebirds because unlike other sea birds they don’t have the oil producing gland that produces the oil that makes other sea birds’ feathers impermeable allowing them to land on the ocean or even dive into it.

For frigatebirds landing on the ocean is about as appealing as walking through fire is for us. Without the waterproofing oil their feathers would become water-soaked and heavy and eventually they’d just sink and drown. Not a welcome outcome so it is perhaps just as well they are such awesome flyers.

So awesome in fact they seem to be able to just hover at any pre-determined spot knowing exactly how much effort is needed to remain there. They are so agile they can catch flying fish mid air or descend and hover above the surface for just enough time to pluck a squid from the surface water. Another useful trick is being able to catch mid-air the regurgitated food dropped by other sea birds before it hits the ocean.

You can catch the Galapagos Royal Frigatebird inflating and mating on the islands of San Cristobal and Genovesa in March and continuing into April. In May they start to lay the solitary eggs in a shallow, platform nest in a low bush or tree. The red pouches are still on display in June but on the north side of Seymour Island and those eggs are hatched in July and August.

After the eggs hatch the male Magnificent Frigatebirds abandon the nest and take off to the ocean skies gliding into the Galapagos sunset, travelling the oceans but never able to land until the next time they encounter land. Much the same as those pirate boats many years ago. 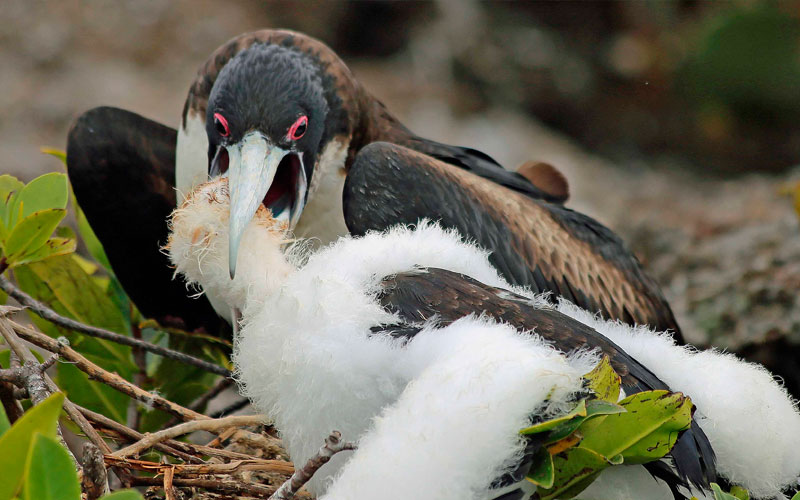