As a Brit living 15 years in Ecuador I have still not eaten every local dish available in Ecuador; most of them but not all. Ecuadorian gastronomy is a little recognized but distinct cuisine. Whereas our southern neighbors have become internationally renowned our Ecuadoran cuisine, deeply rooted in tradition and practicality remains a mystery to most outsiders. 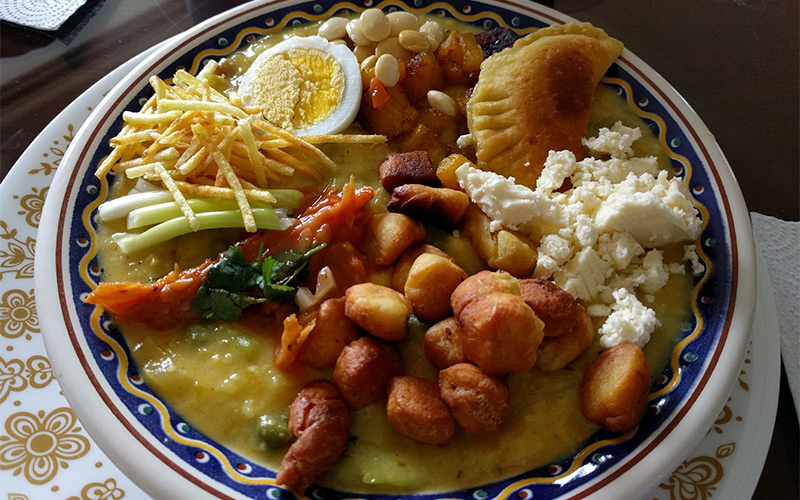 When I first arrived in Quito, the Andean capital city I stayed with a local Quiteno family for several weeks.  Maria Carmen was up early to prepare a filling breakfast that was always accompanied by a fresh juice. I didn’t see a huge variety because I quickly became fixed on “jugo de tomate” which is not tomato juice but a tangy juice made from the native tree tomato fruit. No matter what Maria Carmen tried to offer me; naranjilla juice, pineapple juice, blackberry juice, all freshly squeezed and delicious, I continually asked for my “jugo de tomate”. 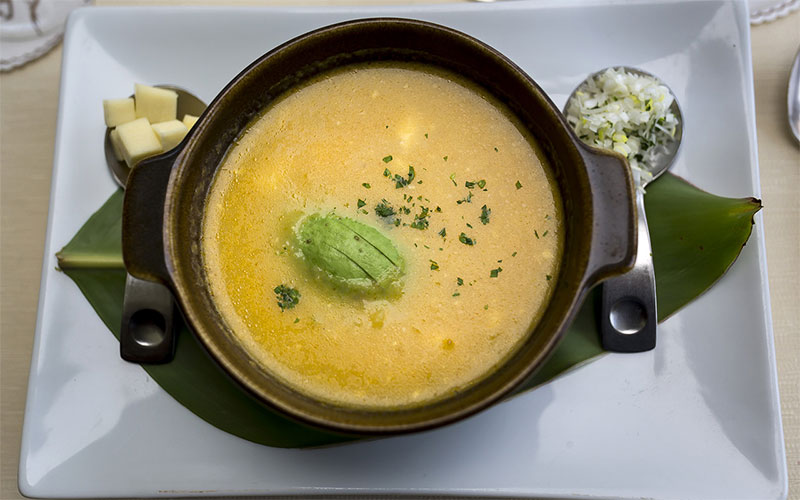 A similar thing happened at lunchtime. In Ecuador, and more so in the Andes, you will almost always be offered a soup as a starter. The variety is amazing, maybe ten to fifteen different soups such as “locro de papa”, a thick creamy potato soup served with melted cheese and slices of avocado;  “sopa de cebada” (barley soup), tomato soup – (regular tomatoes) with mozzarella and basil; lentil soup with onions, carrots, green peppers and potatoes. This is REAL home cooking taking quite some time to prepare and cook. But, I wanted my “locro de papa” and in my broken Spanish, I arrived at a compromise with Maria Carmen so that “locro de papa” was on the table at least every other day. 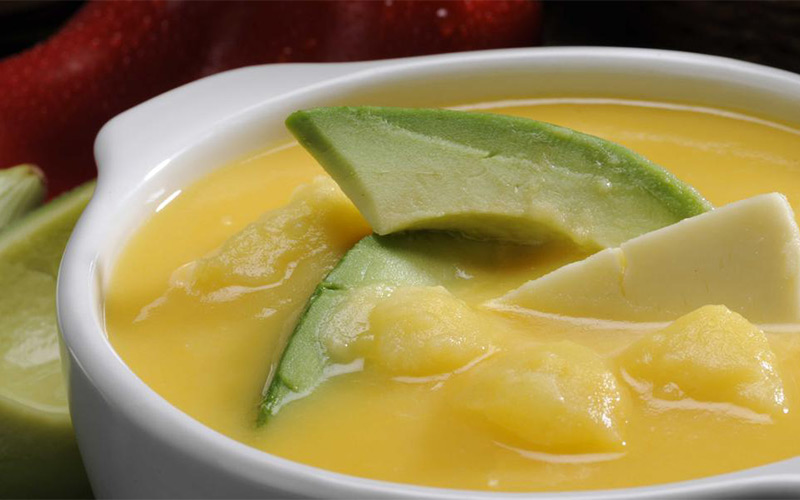 Later, I married an Ecuatoriana and my in-laws, who lived in a poorer barrio, made sure we ate such dishes as “seco de pollo” which translates as ‘dry chicken’ which much to my delight turned out to be an Ecuadorian chicken stew cooked with onions garlic, peppers, tomatoes herbs, and spices. There’s a version with goat as well – “seco de chivo”.

If you have never been to Ecuador you might be wondering if Ecuadorian cuisine is really spicy like Mexico’s food. The answer is that it can be as hot as you want it to be. Truth be told the cooked food, although well seasoned is not spicy at all. But, in every home and every eat-out establishment, a small bowl of yellowy-orange thick sauce is placed at table center with a teaspoon for you to add “aji” a homemade recipe of chili sauce which you add to your soups, your rice, potatoes, anything you want really, to spice up your food according to taste. Ecuadorians will forego pepper in favor of aji and each home-maker has their own recipe. Just ask. They will be happy to share their recipe.

Every second Saturday we ate boiled crabs brought fresh from the coast the previous night. You’d see street vendors sat at intersections of busy roads selling live crabs at ridiculously cheap prices. Fish was more expensive in the Highlands so normally we ate beef, pork and chicken but the Saturday crab feast was something we looked forward to.

Pork is a favorite of Quitenos and they will drive down to Valle de los Chillos (Valley of the Chillos) at weekends to eat “Fritada” (deep fried pork) which is not the healthiest option on any menu but delicious all the same. Driving around in Chillos you can see whole sides of pork being spit roasted at roadside restaurants. This is “Hornado” (roast pork) and it’s served with “llapingachos”, a cheesy potato pancake-dumpling cross seasoned with onions, some salad and maybe all washed down with a bottle of the national beer, Pilsener. 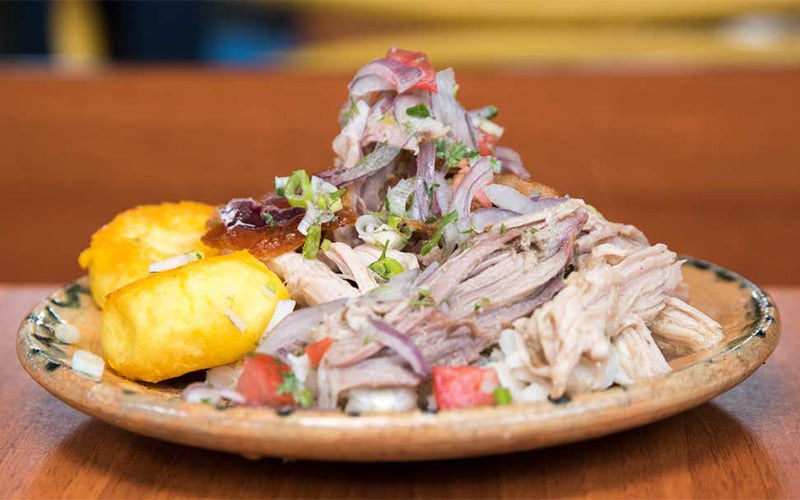 Stay in Ecuador long enough, (a week or more?) and you’ll inevitably be asked if you have tried “Cuy”, Ecuadorian name for the guinea pig. Let me tell you right here and now, raising guinea pigs is an extremely profitable and big business in Ecuador. It is a national dish and relatively expensive to order and hugely popular among Ecuadorians.

Come on – don’t get all squeamish on me. In both the US and Europe we are fond of eating rabbit so why not guinea pigs? My first guinea pig actually did remind me of rabbit. It has a very gamey taste and there isn’t much meat on a guinea pig – as you might imagine. But Ecuadorians love them and a fair few foreigners have come to love them too.

Although the coast of Ecuador is only 2/300 miles away from the mountain towns, a road trip takes anywhere from 6-10 hours depending on which part of the coast and the conditions as you climb up and over mountain passes to the Andean valleys at 9,000 feet above sea level to arrive at cities like Cuenca and Quito. That time/distance/cost barrier means that there are two distinct cuisines on the coast and in the high altitude mountain valleys. Down on the coast and on the extensive coastal plain it is all change!

Here, potatoes are almost non-existent and plantain is the staple, leading to many dishes and side orders with plantain. If you like fish and seafood you will be in heaven eating on the coast. To name but a few classic dishes; ““Cazuela””, “ceviche”, “encebollado”, “arroz con camarones”, “encocado de pescado”. 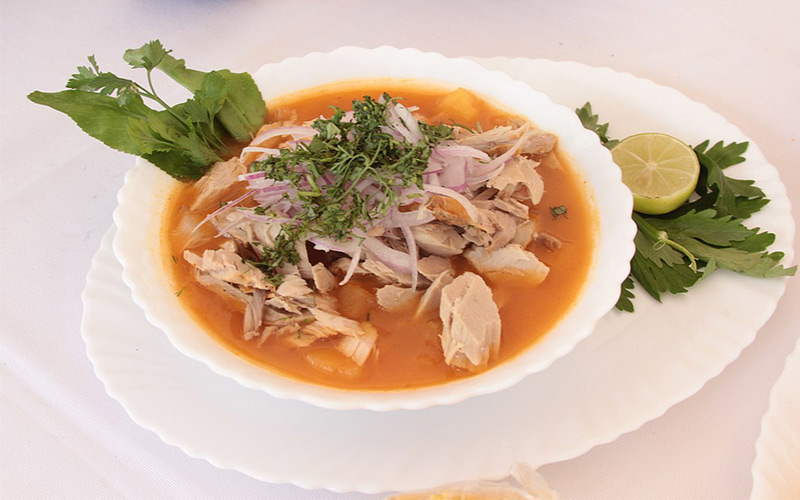 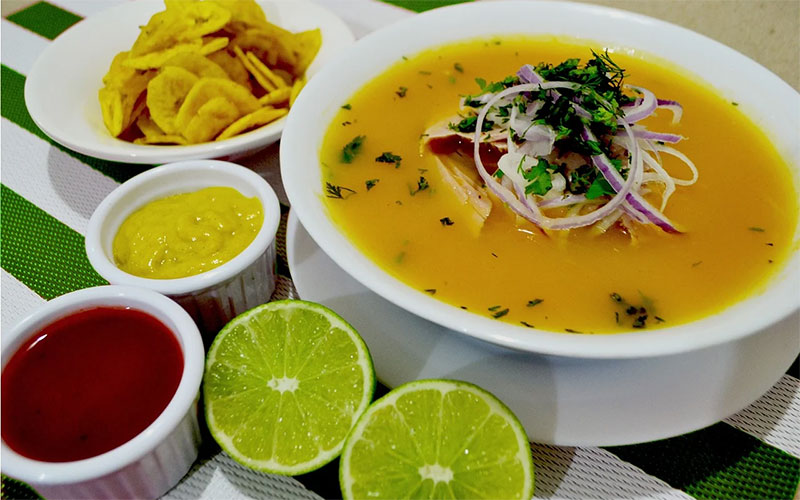 Oh my God! – When I first ate “encebollado” I thought I had died and gone to heaven. “Encebollado” is an Ecuadorian fish soup made with boiled cassava, fresh tuna (but other fish such as albacore can be substituted), red onions, fresh tomato, coriander, and pepper. The result is a heavenly, heart-warming mix of thick, spicy tomato-ey liquid with a lot of nourishing filling carbs and protein to gorge on. And did I mention the popcorn and “patacones” (plantain chips) served with the soup?

As the “encebollado” contains only fish as the main ingredient, it is many times considered the economic substitution to ceviche or “ Cazuela”. “Ceviche”, is an international known recipe, with and Ecuadorian and a Peruvian version. However, the Ecuadorian version of this world-famous dish – one of the few Ecuadorian dishes that have received international acclaim – differs as the seafood is cooked before being marinated in lime juice and salt. Although you can get a “ceviche” of almost any “mariscos” (seafood) or fish probably the favorite of most Ecuadorians is ceviche de “camarones” (prawns) and often it is served as a cold soup with a tomato or orange liquid and of course, that distinct lime flavor served with the ubiquitous “patacones”. 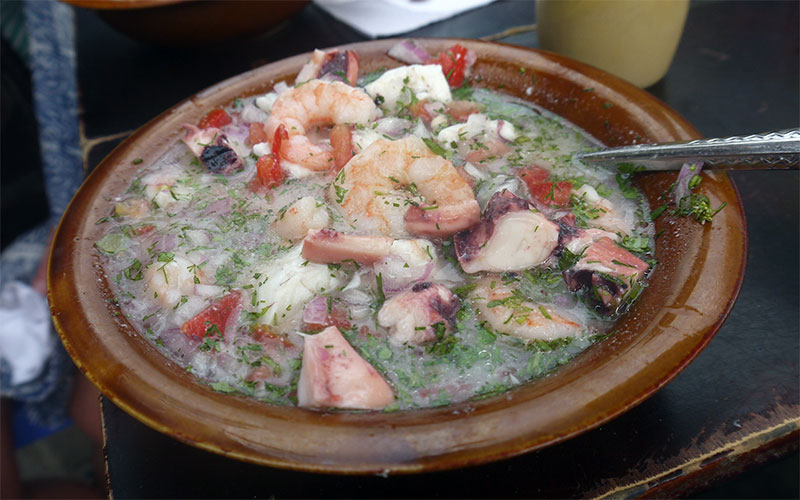 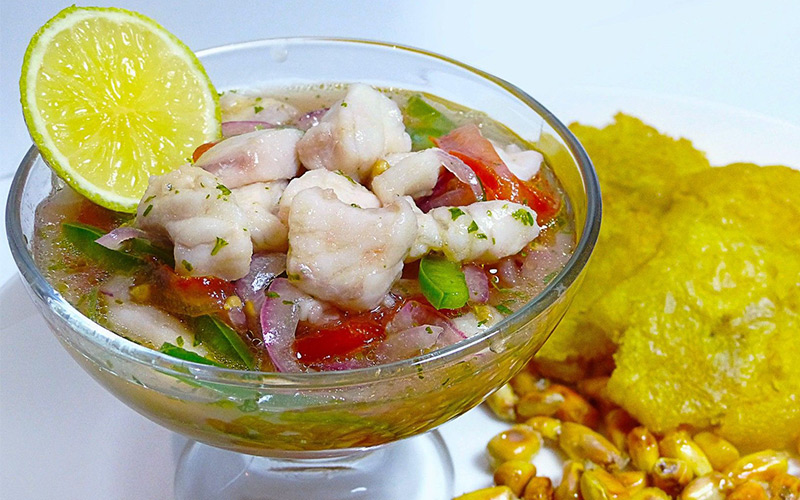 Whereas “Ceviche” is a light serving that is often taken as a starter, “Cazuela” is an altogether different beast. Take  Cazuela as a starter and chances are your main course will go unfinished. “Cazuela” is made from green plantains, peanut butter and whatever type of seafood you wish to add. It is made in an earthenware pot and served in the same pot a “Cazuela”. The food is baked and is definitely very filling. As a “Cazuela” novice, I failed to finish my first dish.

A dish I will absolutely never ever fail to finish is “encocado de pescado”. This is fish, or your choice of seafood, cooked with spices and coconut milk and normally served with rice. It is very common in the northern province of Esmeraldas. This could easily be my favorite seafood dish. Or “encebollado”. I’d have to toss a coin to separate them. 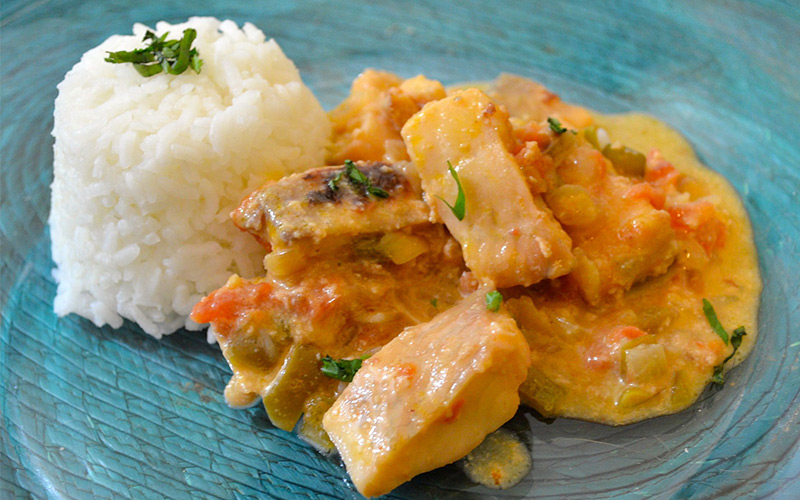 The Galapagos Islands definitely take their culinary influences from coastal Ecuador. It makes perfect sense because there’s an abundance of seafood and it’s costly to import ingredients from the mainland. But of course, there is agriculture in the Galapagos so you can and will find cafes and restaurants that serve chicken and beef dishes.

So if you are wandering around onshore in the Galapagos make sure to search out such typical dishes as “mariscos y arroz” (seafood and rice) – very similar to the Spanish paella, or Cod with potatoes, Yucca (cassava) bread, Seafood soup and shellfish ceviche using an endemic mollusk from the Galapagos.

“Bolón de verde” can be eaten throughout Ecuadorian coastal regions and is considered a staple much as bread is in the western world. It is crushed and boiled plantain and then fried with a good helping of cheese. It is often served for breakfast with eggs and coffee – very filling to say the least.

So you can be sure that a trip to Ecuador and the Galapagos Islands, besides being full of nature and cultural enchantments will always be complemented with a wide variety of delightful typical gastronomy that will thrills your senses.

Ecuador is a gastronomic paradise.  From the Andes to the coast, there are so many tasty dishes.  Ceviche is one of the most famous.  There are several ways to prepare this dish, and the recipes vary from one region to another, but it is more or less a type of soup made from the juices of citrus fruits, shrimp, fish (or both), and cilantro.

Ceviche is one of the most characteristic meals of the Ecuadorian coast.  The varieties of ceviche on the coast can include a great variety of wonderful seafood including octopus, squid, lobster, crab, shrimp, and different types of fish. In the Andes, chochos (a type of local bean, sometimes known as the Andean lupin in English) are included in the ceviche. It is often accompanied with popcorn, toasted corn, or chifles (plantain chips). 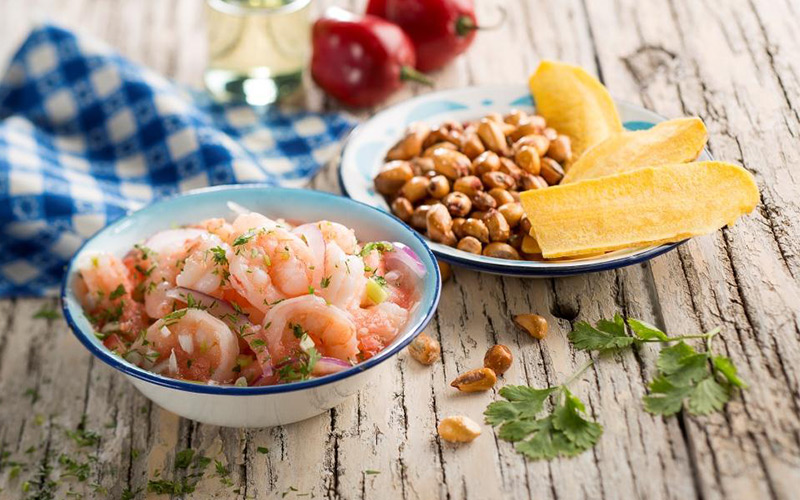 A few other noteworthy Ecuadorian specialties are humitas, patacones, and fritada con mote. Humitas are similar to tamales.  A dough of choclo (a delicious Andean variety of corn) and cheese are rolled into corn husks and steamed. Patacones, a popular side dish, is prepared by lightly frying thick slices of green plantains until they are a bit crunchy.  Fritada con mote is characterized by pieces of fried pork served with mote (another type of corn). 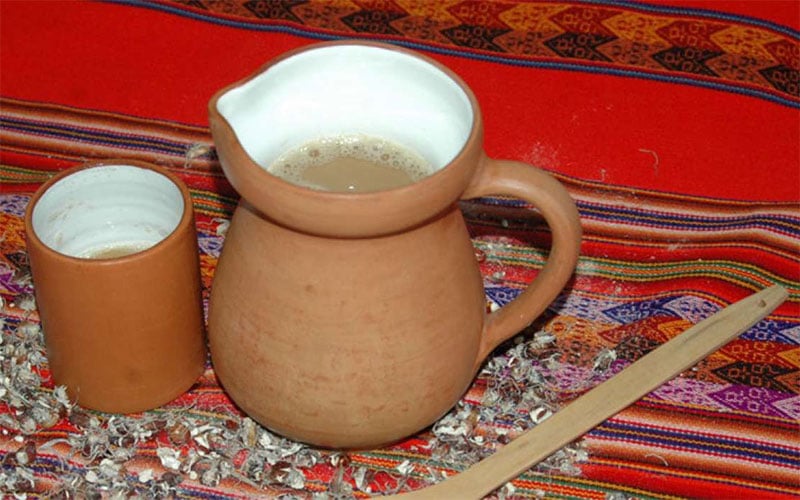 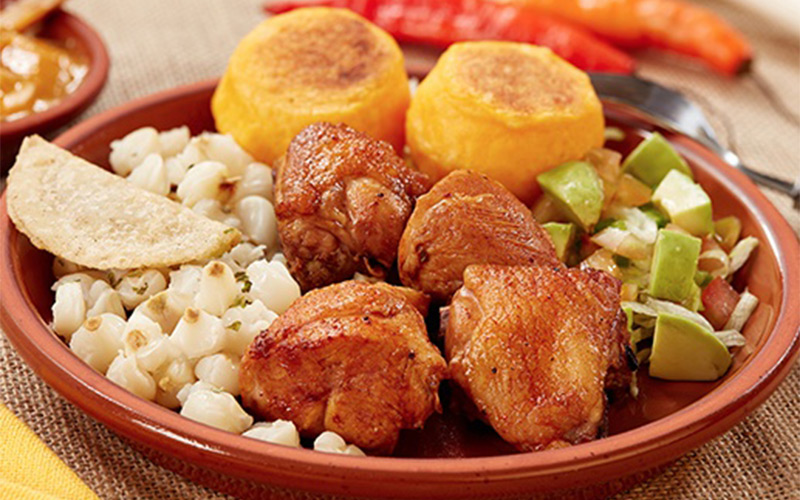 There are also several noteworthy alcoholic drinks produced in Ecuador.  Chicha is a popular beverage consumed in different parts of country.  Chicha has indigenous roots, and it has been drunk by the natives for many years. The recipe for its preparation varies a bit as well.  The most popular chicha in the Amazon region is made from fermented cassava root.  In the sierra, fermented corn is most common.

Pájaro azul is another well-known Ecuadorian drink.   The name means blue bird. This beverage is made from sugar cane alcohol and is boiled with a bit of orange peel.  The process of boiling the alcohol with the orange peel gives this drink its characteristic bluish colour. 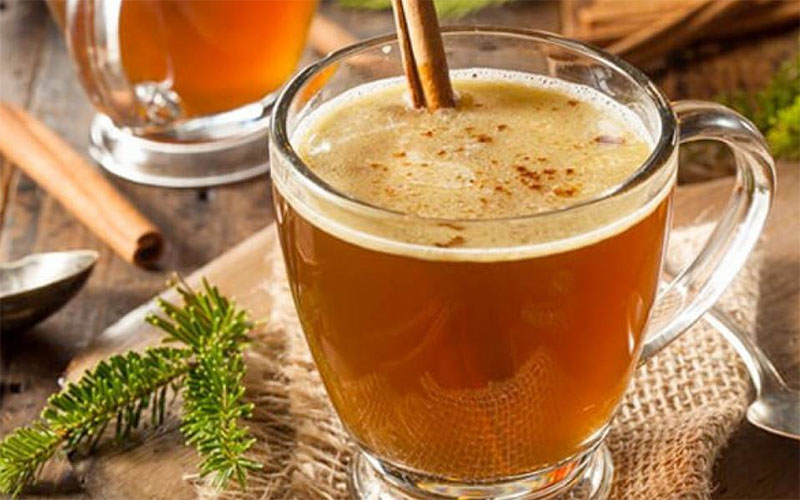 Canelazo is another famous drink.  It is served hot and made from sugar cane alcohol and flavoured with cinnamon.  This is a common drink sold by street vendors and is especially popular during Quito’s foundation anniversary festivals.

Sometimes the recipe varies a bit to include naranjilla or passion fruit juice as well.  Sometimes cloves are included.

Colada morada is yet another noteworthy Ecuadorian beverage.  This purplish coloured drink is made from a base of black corn flour and fruit juices such as naranjilla, babaco, pineapple, blackberry, strawberry, or mortiño (an Andean fruit similar to blueberries).  Colada morada is a special drink enjoyed on the Day of the Dead (November 2) and accompanied by guaguas de pan which are sweet bread figures shaped like a child.