There are three species of booby resident in the Galapagos Islands; none is endemic. Boobies are strong fliers, sometimes feeding many kilometers offshore. They have forward-pointing, stereoscopic vision which allows them to judge distance accurately and pinpoint their prey, even underwater.

One of the archipelago’s most sought-after birds, not because it is rare but because it is entertaining. Everyone who visits the islands will certainly see it.

In trying to attract a mate, the male actually dances. If attracted, a female will come to join him and together they dance the ‘booby two-step´. If all goes well the dance peaks in mutual sky pointing, face to face, and culminates in mating. 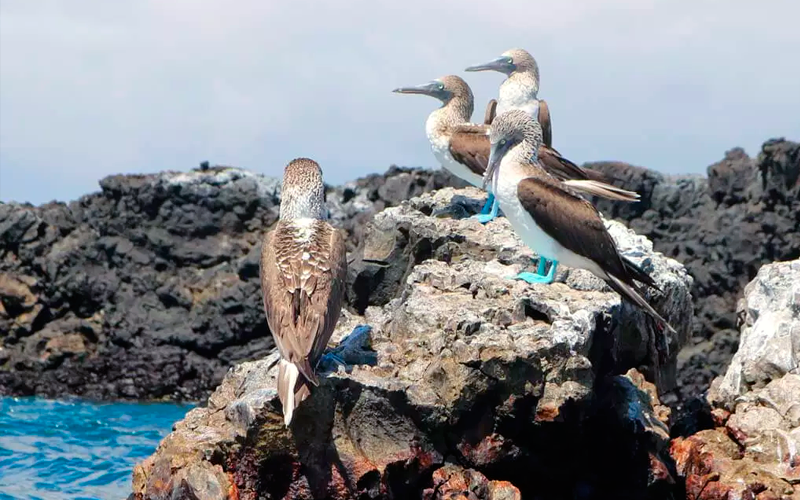 Distributed in only five main colonies around the archipelago. These are situated on the outer islands close to deep, oceanic water, their preferred feeding area.

Red foots are the smallest boobies and partly because they may feed hundreds of kilometers offshore, only manage to bring back enough food to raise a single chick.

Young red-foots in particular often come to investigate boats approaching their island colonies, and show off their perching ability by landing on the rigging and rails. As a survival method they have learned to accompany ships and feed on flying fish which the boat disturbs. In a display of fast low-level flying, red-foots snatch the fish in mid-air.

Masked boobies, or Nazca Boobies, lay two eggs but only ever raise one chick. The eggs are laid a few days apart, giving chick hatches, its stronger sibling attacks it and pushes it out of the guano ring which represents the nest.

The parents ignore the battle, known as obligate sibling murder (or the “Cain and Abel syndrome”), and leave the chick to its fate – invariably an attack by mockingbirds. Should the first egg not hatch, the second egg fulfills its role as an insurance and goes on to reach maturity.